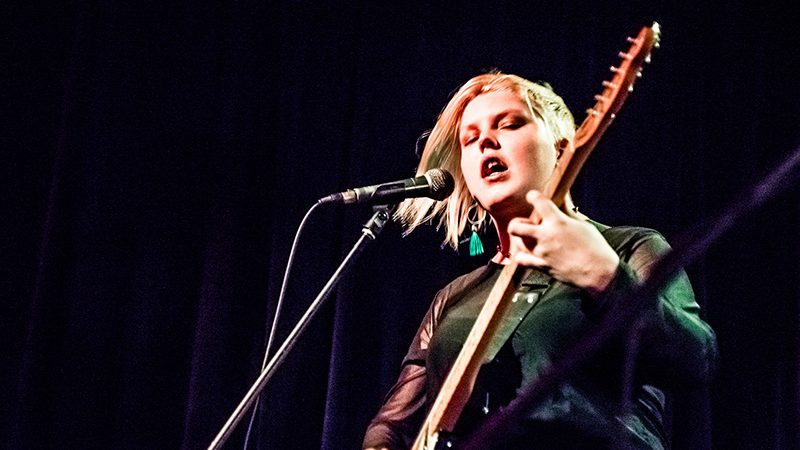 Cable Ties are the best band I’ve seen at The Phoenix since Destrends last visited us. This was proper punk, fuelled by fury and executed with a very pure passion. Jenny McKechnie’s energy was so ferocious and gripping. So happy to have been right up the front for this, and better yet, I was standing in between Hayley of Moaning Lisa and Kate of Slagatha Christie who were just dancing their rock ‘n’ roll butts off with me after starting the night off with such a bang.

Slagatha Christie have now acquired a beautiful new guitar (R.I.P. Spongebob), but now you can actually hear their songs being played how they were intended. Every time I see them someone says to me, “these guys are just getting better and better,” and it’s completely true. Shoutout to drummer Stephen Watson’s denim shorts! I don’t know how you got them on but it deserves recognition. Bravo!

Moaning Lisa debuted a new song that Charlie Versegi has lovingly written about her partner (yeah, they’re that couple now, and it’s disgustingly beautiful). It’s called ‘Good’, and it’s not good. It’s great. You could definitely feel something personal being imparted from the band to the crowd, particularly from Versegi. The only thing I wished for was for them to play ‘Time’, because it’s my absolute favourite and I haven’t seen them play it in forever. C’mon guys, it’s a masterpiece and I want it!

But back to Cable Ties. Jenny McKechnie is one of the most intense performers I’ve ever seen. Perfect amount of aggression and technicality in her vocals and every lyric just punched you right in the gut. We were all just picking our jaws up off the floor for the entire set, listening intently to the words being screamed at us and screaming back “Fuck yes!” as we were completely consumed.

Listening to their album in my car takes me back to listening to The Slits, Siouxsie & The Banshees and X-Ray Spex albums enthusiastically plucked from my dad’s vinyl collection and spun to my tween self. Thank you for that sensation, Cable Ties. Your LP will never ever leave my car.