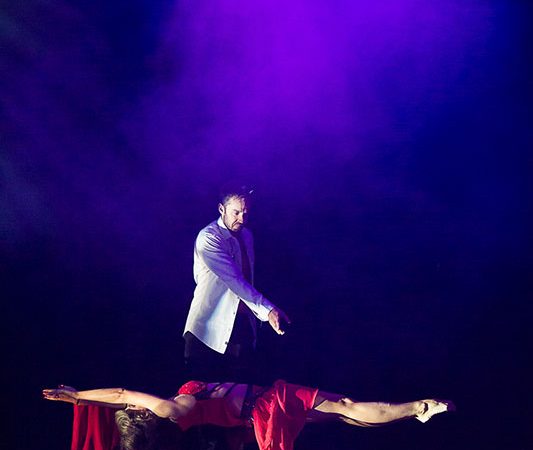 Billed as ‘An Illusion & Dance Spectacular’, Eclipse was a bit like Mandrake the Magician meets Riverdance. It was a family friendly show, with lots of children in attendance. Little eyes lit up as the curtain leapt up to surging synths, revealing dancing spotlights and a sinister-looking metal table. Dancers in sparkling outfits heralded the arrival, in a cloud of stage smoke, of the star of the show Anthony Street.  Street has a distinguished background in Irish dancing and Eclipse combined his twin passions of dancing and illusion. It was a real family show for Street too, with his mum on wardrobe, uncle providing transport and nanna selling the merch.

Sometimes the dancing was casual window-dressing for Street’s tricks, but at other times it was the feature event, and then it shone. The Irish moves were provided by the Celtic Illusion dancers. The soundtrack, created with the involvement of Angela Little, swept the dancers along, with the music well mated to the dance moves. The furious rap of tap shoes against the hard floor, with dancers all perfectly synchronised, was impressive. There was even a ‘dancing box’ hanging in the air.

The action amped up in the second half, with some more contemporary dance moves, courtesy of Daniel Ryan and Alfie Scalia’s ‘Ignite the Dark’ jazz dancers A highlight was the Roaring ‘20s sequence, with sparkling flapper outfits taking on a life of their own, enhancing the dancers’ movements. Celtic themes continued with some spectacular high kicks and a notable solo spot by Street, dancing to a bodhran (Irish frame drum).

The standard of the illusions was not so spectacular, but would have impressed the littlies watching. Street’s repertoire covered a conventional range of items, including rope tricks, the lady in the box of swords and the levitating lady (with the obligatory pass of a ring along the length of her body). Sudden appearances or disappearances, or instant costume changes in the wink of an eye, were frequent tricks. (Some punters were seen doing their own version of these during the interval.) An impressive item was the ‘prediction’. Punters, selected by chance by a large ball bounced about in the audience, provided random words which were subsequently revealed to be written on paper in a locked box. How does he do it?!

There were circus style acts too, including a lady on the suspended ring, (demonstrating feats of strength and balance) and a blue leotard-clad woman making daring moves while entwined in hanging red drapes. A sudden miscalculation in the wrapping around her legs etc. could spell disaster!

Overall, the illusions were executed with flair and polish and these, combined with the great dancing, the atmospheric sound track and the many changes of dazzling costumes, made for good entertainment.