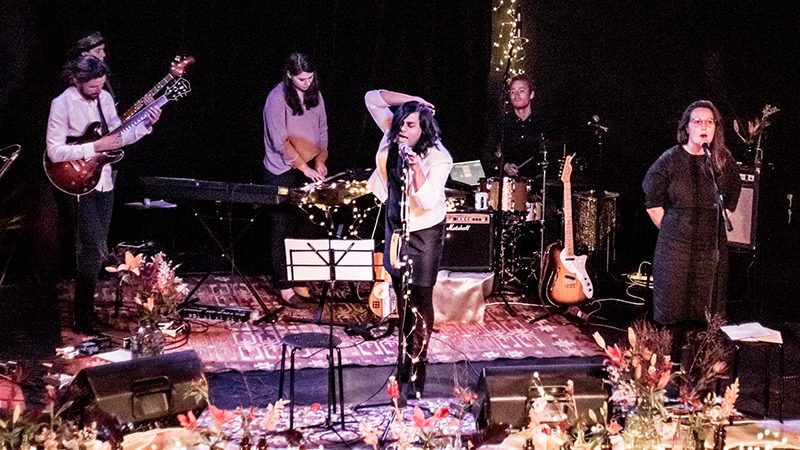 The night began, unlike almost any other gig review in these pages, with a panel discussion involving the three bands on the bill. Often panel discussions are merely the public reproductions of previously stated views, but this panel forged genuine conversation around the ideas of identity representation, community and the arts.

Sydneysider Naif, formerly of Hannahband, was the first to hit the stage, armed with a guitar and drum machine. Naif’s set provided the tone for the night with personal, confessional, emotional takes on times past and present. With elements of folk and punk rising in the set, Naif’s voice provided the focal point, cutting through the surrounds of the theatre.

After three-ish years of playing consistently around Canberra, Wives are slated to take their first extended break. They couldn’t have entered it in better style. The band, which has slowly shifted in size and sound over this time, has firmly become a must-see live band for those in the know around town. The trio demonstrated their own brand of acerbic post-punk, with enough diversity in sound to keep it engaging.

Shoeb Ahmad has played in a multitude of projects over the years, but watching the set in the confines of the theatre you couldn’t help but feel that this was the most personal of them. Surrounded by a band composed of parts from other prominent local bands (Cracked Actor, Honey, Pocket Fox, Helana Pop), Ahmad embarked on a set of bold indie pop with plenty of melodic flourishes. Throughout the set Ahmad directed traffic from the front, and the band responded in kind with an extremely cohesive display. On a night that often focused on identity, and the perceptions of it, Ahmad’s set was a display of someone who is not just comfortable in their own skin, but proud of the person that they are.

Support Cody Atkinson on Patreon!
7% complete
When we reach $500 per month we will begin the official BMA Podcast. This will include interviews with some well-known musicians and artists, tips and tricks for publishing in print and online, as well as other discussion topics around Bands, Music and Arts in Canberra!