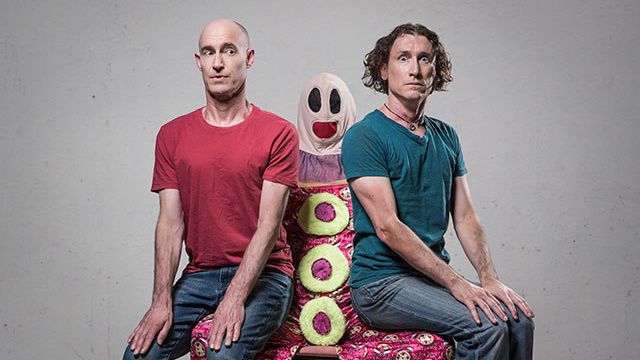 When I asked David Collins of THE UMBILICAL BROTHERS the reason why they’re reviving their classic show Speedmouse for their upcoming tour, it seemed like a simple question. “We’ve got five 90-minute theatre shows that we tour around the world, and this is the one we get asked to do the most,” he says. But Collins confesses there’s actually a second reason.

“We haven’t invented a new show, which we were meant to do by … actually, this month. We had put this month down to do a new show … Has the month finished yet? Or have we just begun? Oh no, we’ve gone past that month!”

But when you consider what Collins and co-Umbilical Shane Dundas have been up to over the last few months, it’s no surprise they’ve been too busy to keep track of the date. Five weeks of off-Broadway shows and performing on The Late Show with Stephen Colbert: they’ve been working their socks off to get back into the mainstream US market after a while away. “We spent all of 1999 in America. We’d gone back a few times, but we had done theatres that were subscription-based, so not promoted to the public, so when we went back this time it was like starting again. No one remembered us,” Collins reflects.

That said, they weren’t complete unknowns. “We’re most known there for our kids show, The Upside Down Show. When Shane and I walk down the street, it’s not, ‘hey, it’s The Umbilical Brothers!’ It’s, ‘hey, it’s the Upside Down boys!’ So we had to start again. It really was a very humbling experience for us, because we just had to build an audience, like we had to do 25 years ago, like we’d had to do in 1999 when we were there for a year.”

Collins goes on to mention the inevitable: the effect the new POTUS has had on comedy in the States. “It’s a very, very weird time over there with the political situation, but because of that, as I was telling them, they’re now the centre of the comedy universe because of Trump and they’ve created themselves an alternative universe that we can all watch from the outside and laugh at,” he remarks. “So it was nice to be in the centre of the comedy universe and perform comedy.”

Even if you’ve seen Speedmouse on DVD, you’re not going to be seeing the same show in the theatre. “We’ve done it so many times now that it’s different from the DVD. The DVD was so popular that we actually had to change the gags, because … comedians aren’t really like a rock band, where people like to see the same band [play] the same songs over and over. All the [middle] fingers are completely different,” he reveals, alluding to one of the most iconic routines in the show. “There’s a whole lot of stuff we’ve modified to update and keep ourselves interested more than anything else!”

While the Umbilical Brothers are the stars of the show, there are two other characters who are key to the success of Speedmouse. “The Roadie of the show, the most popular character in the show, really hasn’t been available. He had a couple of kids, but now he would like to get out of the house! His kids are old enough [for him] to go, ‘Get me out!’” Collins jests, before going on to explain that his relationship with the Roadie is … a little strained. “I’m not sure why we have a roadie,” he says. “Shane would contest that. He thinks it’s integral, but none of our other shows have a Roadie and we seem to get by … But luckily we’ve got Tina, our tech who does light and sound and puts the show together, and she’s awesome. As long as she’s around, I think I’ll be okay.”

Before we wrap up, I ask Collins if he has any Canberra stories he’d like to share. His response is definitely unexpected. “What the hell am I talking to you for! Yeah, I have a Canberra connection: it’s fucking Shane!” he says, with mock indignation. “What the hell! Are you kidding me? They got you to call me?! And not only that, he’s much better at interviews than me!” But that’s not all. “Our manager is from Canberra as well! And I’m pretty sure the Roadie’s from bloody Canberra!”

Collins pauses, seemingly to catch his breath, before going on to share an interesting tidbit for anyone considering heading along to the show. “He lives in Sydney now, but the Roadie is going down to Canberra and he said he’s going to bring his freakin’ son on the stage with him!” It’s not hard to tell that this idea seriously tickles Collins. “Only people who’ve seen Speedmouse will know how exciting that will be.”

The Umbilical Brothers bring Speedmouse to the Canberra Theatre Centre on Saturday July 8 at 8pm. Tickets are $49.90 + bf and can be purchased at canberratheatrecentre.com.au.

Support Noni Doll on Patreon!
12% complete
When we reach $500 per month we will begin the official BMA Podcast. This will include interviews with some well-known musicians and artists, tips and tricks for publishing in print and online, as well as other discussion topics around Bands, Music and Arts in Canberra!