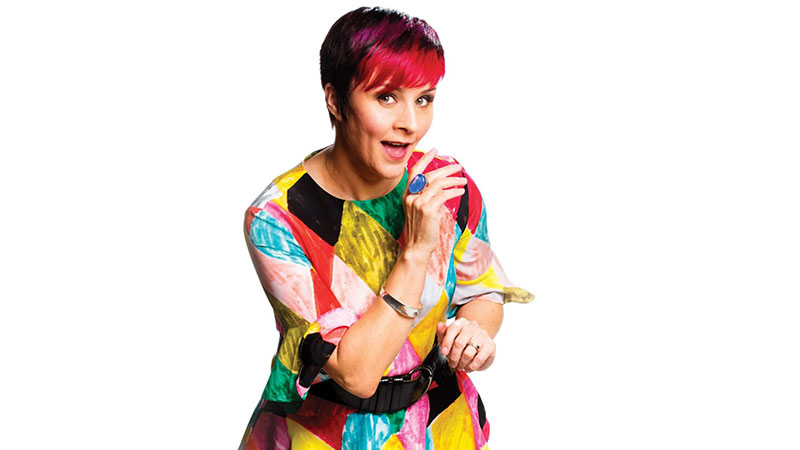 Ladies and gentlefolk, it’s a mouthful to say and a mouthful of cachinnation, tongue-tied together in a delectable package presented by CAL WILSON. You know, that pixie-faced red-headed lady we usurped from New Zealand. The MELBOURNE INTERNATIONAL COMEDY FESTIVAL ROADSHOW (MICFR) brings together some of the most talented local and international comedic superstars from this year’s festival and will be heading to over 80 destinations across the country, including a pitstop at the nation’s capital – it is guaranteed to be a memorable evening of uncapped humour. Wilson gave us an insight into what it’s like standing at the helm of Roadshow.

We tend to stick with the same line-up. The Roadshow goes for about two months with two teams of comedians so people swap in and out all the time, but once you’ve got your line-up that line-up will stay … the team that you guys are given are all great, I love them all and I’m very excited. Damien Power, Dane Simpson, Daniel Connell and Sam Taunton. They all have really different perspectives on things and they’re all really funny, which is lovely.

How did you end up landing the gig as one of the MCs?

I guess I’ve been doing it for a while. I emceed this Roadshow in 2001, I think. So it’s a big jigsaw puzzle for the organisers … they sort people out and try to get international acts and things like comedians who have come over to do the festival but they go home to America or wherever, they try to get some of those on as well. They just ring you up and ask when you’re available. There’s always lots of interesting experiences to be had on Roadshows, everyone’s always dying to do [them] so if they ring you up for it, you jump at the experience.

Which headliner do you highly recommend and why?

I love them all. They’re all so different, Damien Power is a real thinker. I watch him and I think that I never would’ve thought of that in a million years. He has really interesting thoughts. Daniel Connell is really great and can be quite unexpected. Dane Simpson has a wealth of stories about his dad, who is hilarious. Sam Taunton is … in his mid-twenties, so he’s got like a kind of ‘young guy’ perspective. He’s literally twenty years younger than me so I like hearing his perspectives on stuff. They’re all really great guys. If you don’t like one, you’ll like another one. There’ll still be something for everyone.

Do you have any favourite memories of backstage antics or on the road hijinks that come to mind?

This week … we were at a pool in Darwin and they had loads of pool noodles and we put them all together and were leaping on them and trying to work out what to do with them. Then when we left Darwin we went to Kununurra and so we stopped off at the Toy World on the way to the hotel and bought 28 pool noodles. So we’ve been filming pool noodle challenges. Yeah, I mean travelling with comedians is just as mature as you’d expect.

And we just try and find every tourist attraction that we can to go and see … I’ve always wanted to go to Cockington Green outside Canberra, that’s my aim, because I’ve seen brochures for it. The two big things about Roadshow are the fact that you spend months doing your own show, so you talk for an hour by yourself and know your material backwards. So you get to be on Roadshow, you get to watch other comedians and listen to their material, which is great if you haven’t heard it and you get to go to ridiculous tourist attractions.

You’ve been in the comedy game for a while now, are you still prone to getting the willies? Assuming you were ever nervous in the first place.

It’s changed a bit. I don’t get as terrified as I used to. You still get nervous before you go on stage, but I think you have to be nervous otherwise you’re not doing your best work. Like, you have to want to please the audience, entertain them. Like if you walk on stage and you don’t give a shit there’s not really a show. But I don’t get that terrible dread that I used to because I’ve been doing it for long enough now. And the other thing that’s really great about Roadshow is that if you’re on the road for a while you start to gather material from the places you’ve been. It adds an extra element if you’re trying it out on the audience about the places they live. It can be kind of exhilarating to express the things you think about their town.

Being a prominent female comedian on the Australian and New Zealand scene, do you have any advice for other funny fannies wanting to break into the industry?

You’ve just gotta keep doing it, that’s all … I think the more young women see other women being funny the more [they] view it as an option. It’s definitely changed a lot since I started out years ago. There could always be more of us. The woman I’m touring with at the moment, Danielle Walker, who I think is 24, her show is hilarious and dark … she’s just so great and I’m really excited to get to see her work. Getting to watch her do a whole set and just keep the audience enthralled … and very happy. It’s great. The question isn’t ‘why aren’t women funny?’ it’s ‘why don’t you find women funny?’ … The dinosaurs are dying out, it’s definitely changing.

Cal Wilson and her gaggle of gag-filled followers perform at Canberra Theatre Centre on Saturday June 24 at 7pm. Tickets are $46.90 + bf at canberratheatrecentre.com.au.

Liked it? Take a second to support Leanne Duck on Patreon!

Support Leanne Duck on Patreon!
12% complete
When we reach $500 per month we will begin the official BMA Podcast. This will include interviews with some well-known musicians and artists, tips and tricks for publishing in print and online, as well as other discussion topics around Bands, Music and Arts in Canberra!