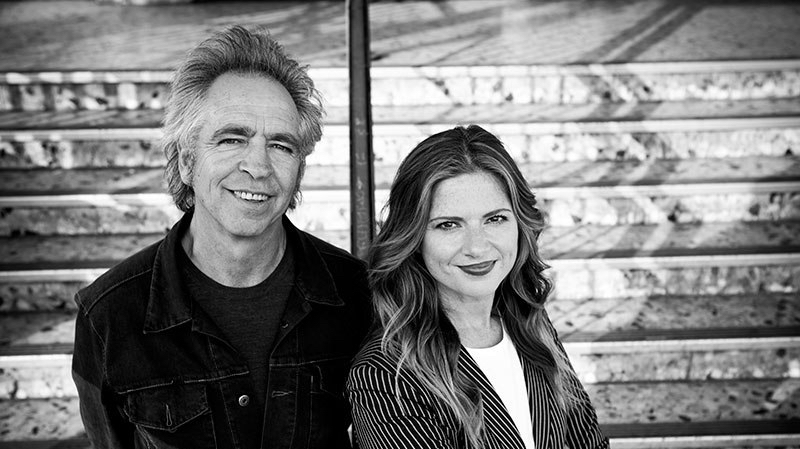 Ladies and gentlemen, prepare yourselves for a night of fun, laughter, and rock and roll history. ROCKWIZ LIVE! TWENTYSEVENTEEN is coming to Canberra this June with hosts BRIAN NANKERVIS and JULIA ZEMIRO, along with the rest of the cast. Starting out as a television show in 2005, RocKwiz has grown to national success over the years, gaining traction with multiple national tours. The hosts of the show have put their massive success down to Australia’s love of live music.

“No one else really does live music on television at the moment, and I think that’s what makes it really exciting,” Nankervis exclaims.

“I think also it’s that we provide a mixture of household names, as well as more obscure and up-and-coming artists, and people like discovering new music.” Zemiro adds to this, saying “RocKwiz is unique in that we have a full band, and more than one artist and more than one song that’s played during each episode, compared to maybe the one song you see on the Tonight Show, or on Rove Live.”

Agreeing with Nankervis’ statement, Zemiro examined the fact that people love to hear live music. “When I was about 15, you were able to see live shows like Countdown, and go to the taping of it. Of course when you got a bit older you’d go to the pub and there would be a band playing. A lot of music shows disappeared after that.”

Even after being on air for over ten years, they still manage to pull a massive crowd, keeping their content fresh and new. “Its not easy,” Nankervis says, laughing. “I have friends who help me write the content. I’m constantly planning and plotting to work out new ways to make it work. The show has been tweaked and fiddled with, but the format has stayed much the same as when we first went on air in 2005.”

Agreeing, Zemiro also says that the band help out a lot. “They keep a look out for new ideas and new music to help us out with the show.”

On the road they stick to the same principals: rotating questions and coming up with new ones to keep the energy and excitement up. “We have a few set pieces and structural bits that we keep the same for each show, but the script is changed every night.” Nankervis notes.

Adding to this, Zemiro comments, “It always feels new and exciting because every night there’s four new people behind the desks from the audience. That’s what makes it magic.”

Travelling around with the RocKwiz cast are talented musicians who appear on stage as the special guests. Nankervis explained how they go about getting the guests that tour with them, noting that having local artists from each area can make rehearsals sometimes difficult. “A few years back we did a tour where the artists were local to the area where we were, but we noticed that audiences usually want to see artists that they don’t normally see.”

RocKwiz started out as something that was aimed at those people who grew up watching live music, mainly baby boomers. The cast soon realised that the demographics that they were aiming at spanned much further than that. “We found that really young people are watching the show, so we try to cover all the bases. For example we might put a question about Chuck Berry next to a question about Daft Punk,” explains Nankervis.

Along with this, Zemiro adds that they do the same thing with guests. “We try to match an older performer with a new performer. This way it introduces new music to the older generation, and teaches younger audiences about music before their time.”

As for the future of RocKwiz, it seems as though it’s going to be continuing for many years to come. “We’re like a big family,” both Zemiro and Nankervis exclaim. Judging from the longevity of the show you most certainly would be able to see that. “In the future I think RocKwiz will take over the world!” says Zemiro, jokingly. “In all seriousness though, it would be great if we could take the show overseas.” The duo seemed disappointed about their show not being on our screens this year, but both are excited to have a comeback in 2018.

“We’re hopeful that we keep making our TV show,” states Nankervis. “Unfortunately we haven’t been able to make a new series this year, but we hope that we’ll be back in 2018.”

The live show is set to be a winner, with both Zemiro and Nankervis agreeing the tour will be just as great as what we see at home on television. “The curtains, the buzzers, the atmosphere, and the chandelier are there,” both exclaim. “The difference with the live version is that it has more space to improvise because we’re not filming for TV,” Zemiro adds, saying, “We can be more cheeky if we want.”

Liked it? Take a second to support Morgan Hain on Patreon!

Support Morgan Hain on Patreon!
12% complete
When we reach $500 per month we will begin the official BMA Podcast. This will include interviews with some well-known musicians and artists, tips and tricks for publishing in print and online, as well as other discussion topics around Bands, Music and Arts in Canberra!