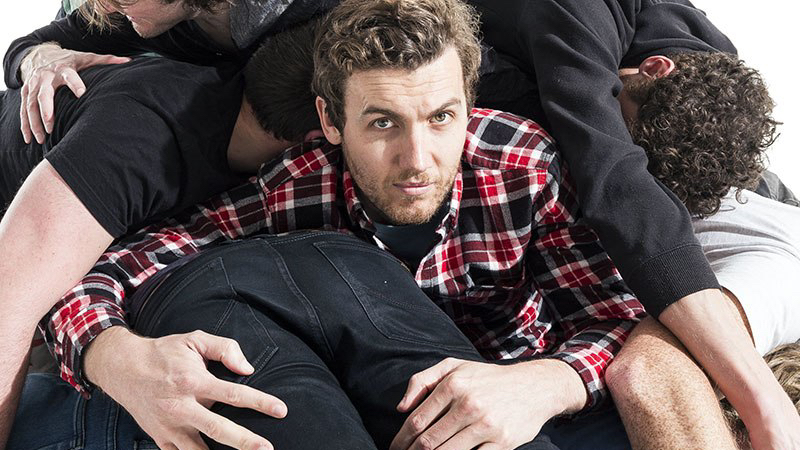 There are few certainties in life, but one thing you can count on is that every year, without fail, the month-long Melbourne International Comedy Festival blows through the Victorian Capital like a cyclone, but like the fun kind of cyclone that’s safe enough for you to sit and watch from your living room. And if you’re a FOMO-prone Canberran, you can also count on seeing some of the best acts from the festival right here in the ACT when they stop through as part of the MELBOURNE INTERNATIONAL COMEDY FESTIVAL ROADSHOW.

SAM TAUNTON is one of Australia’s hardest working and fastest rising comedians. Now in his second year of the roadshow, Taunton is still riding the comedy festival high. “I’ve been on the roadshow for about five weeks now. The festival finished on a Sunday and then on the Tuesday I flew out to Tassie … so I haven’t really had a break.”

Taunton’s debut solo show Taunts Down for What received widespread praise throughout MICF, resulting in a Best Newcomer nomination. “I was really excited about my run but it ended up going so well and to get a newcomer nomination at the end was very satisfying and kind of validating.”

DANIEL CONNELL is another one of Australia’s rising comedy stars who’s also performing in the Comedy Roadshow. Connell has been working hard in the Melbourne comedy scene for years and enjoys a day job as a writer on The Project. However, you’re most likely to recognise Connell from his appearance on the Melbourne Comedy Festival’s Oxfam Gala in March, an opportunity which Connell says was unexpected. “It was ridiculous! Getting asked to do it was quite a surprise. I definitely didn’t expect to be asked that at this stage, but then in the three weeks leading up, after I found out it was just a lot of thoughts about what set I was going to do … but then you just do your set and you’ve got to try and hope that they put it up.”

Performing in the Canberra leg of the roadshow is a particularly big deal for Connell as it’s where he first started performing comedy. “Having started in Canberra doing The Front and Phoenix Bar and The Civic Pub, it’s cool to go back and do that big theatre. I remember watching shows there and thinking it would be awesome to perform in that theatre. So yeah, it’s pretty cool. I’ll be able to get some family there and show them that I’m not wasting my time.”

Connell won’t be the only Roadshow performer with familiar faces in the audience. Having grown up nearby on the Central Coast, Taunton has some Canberra ties as well. “Yeah, I grew up in Nowra and my dad grew up in Canberra so I’ve got a bunch of family up in Canberra, so I’ll be excited to go back and hang out.”

Liked it? Take a second to support Ian McCarthy on Patreon!

Support Ian McCarthy on Patreon!
11% complete
When we reach $500 per month we will begin the official BMA Podcast. This will include interviews with some well-known musicians and artists, tips and tricks for publishing in print and online, as well as other discussion topics around Bands, Music and Arts in Canberra!