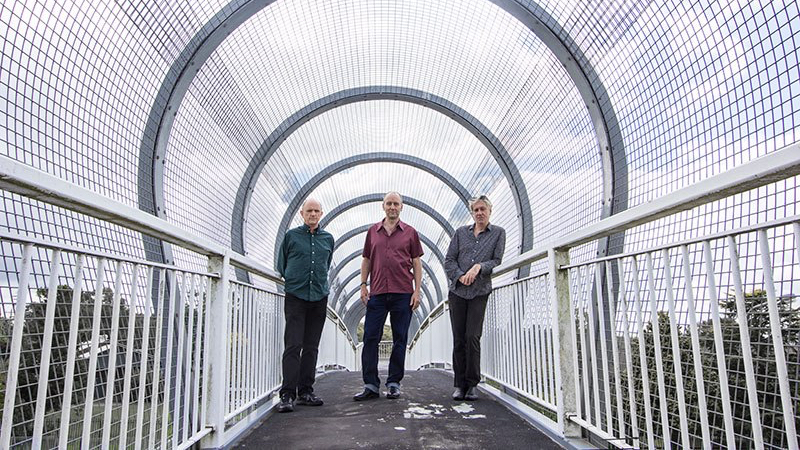 When THE NECKS play you their drone-inflected, free improvisation mania they’d prefer you don’t expect to be impressed. Double bassist Lloyd Swanton tells me the ideal audience for The Necks is the already converted. In my own humble opinion however, all you need is a simple piece of information: no single Necks performance is ever planned or recreated. 31 years ago, the group hit upon this magic formula, and their bonkers dynamic has allowed the trio to endure.

“The modus operandi hasn’t changed at all, which is what has been really amazing,” says Swanton. “I don’t know why we hit on it of all people, we’re not Einstein, but it worked really well, and now 31 years later we’re generating fairly different music, with the same three guys making it.”

After hearing the suggestion that their music often revolves around beating a musical figure to a pulp, Lloyd chuckles.

“My recollection is that I wanted the process to be unhurried. I guess we wanted to take principles of free improvisation, which we were all familiar with, but set it onto a very different time frame. There was plenty of free improvisation that went for an hour before we came along, but they were a lot more data rich, that was what separated us. If that upsets the ‘true’ improvisers, so be it!”

The Necks are a key reminder of the distinction between free jazz and free improvisation; not that there isn’t overlap Swanton contends, but that they firmly reside under the umbrella of the latter. Their live performance captures the sound of the room that they occupy, as difficult as that is to quantify.

“It’s a bit like starting a fire, we get something started and see where it’s working.”

In the employment of such a performance convention, the question of whether that fire ever burns out is an interesting one.

“Only a few months ago, we played in Knoxville, Tennessee … We did our customary two sets and our first set was one of the best things any of us had done in a long time. We then proceeded to play one of the strangest pieces we’ve heard ourselves play! It was never bad but it was never good … it was our method at its most vulnerable.”
Trying to get categorical about the resulting music is not something they do, Swanton says. However, the word “cinematic” is one that often gets attached by others.

“I don’t think our music is always appropriate for cinematic use because it has its own pacing and internal logic that will not be beholden to the narrative arc … Having said that, a lot of people describe our music as cinematic and I know exactly what they mean, it’s just the cinema inside their heads.”

Experience The Necks at The Street Theatre on Sunday June 18 from 6pm. Tickets $35-45 + bf through thestreet.org.au.