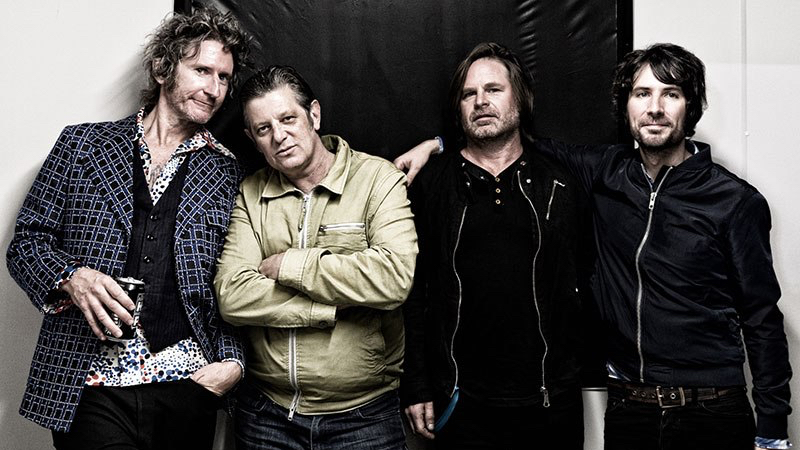 Ahead of the You-Do Gurus Oz-rock extravaganza, bassist of YOU AM I Andy Kent can’t seem to recall the particulars of his first rock and roll moment. “Fuck it, the fact I can’t remember probably says everything … One minute you’re young thinking something is rock and roll, and the next you’re cleaning up six ARIA awards and Nina Cherry wants to have sex with you.” If there’s one thing I learnt in our conversation, it’s that “fuck it” is Kent’s favourite mode of digression.

You Am I are a black and bloodied Australian gem of devilishly clever alt-rock that, over an illustrious twenty-five year career, have gone from dreaming of being The Who to playing alongside them. Fronted by the indelibly charismatic Tim Rogers, the trio-turned-quartet hold the singular achievement of being the first Australian band to smash three successive number one albums out of the park (Hi Fi Way, Hourly Daily and #4 Record if you’re yet to be acquainted). Yet, when pressed on a defining achievement, Kent is just proud they’ve all remained friends.

“You hear so many horror stories of so many bands, they find it really difficult to do simple things like travel and play music … Probably it’d only be about three arguments and that’d be it but … why throw something away you spent so much time and worked so hard to get right?”

It’s a little harder to explain exactly how they have remained so close.

“It’s kinda like still playing football after you’ve played for years except you don’t need to be as competitive … actually that’s a shit analogy, but you know what I mean?”

As Rogers once crooned, You Am I talk a lot about football and, whatever its significance, they have more than earned a place at the lager-stained table of Australian rock royalty alongside tourmates Hoodoo Gurus. In 1992 however, their first tour supporting the Gurus wasn’t quite so cruisy.

“We were just starting out and so it was very much a case of the young boys having a crack … There was only three of us in the touring party, and the rule back in those days was that as the support band, you had to provide two PAs to load in and two to load out. One person was both loading in and out during the show,” Kent laughs. “We had that idea of playing Sydney and Melbourne every now and again to party on and then we toured with those guys and learnt that if you started a tour, you just didn’t stop.”

You Am I’s famously exhaustive tour scheduling has led them to “plenty of places we’d rather not play than Canberra” (New ACT number plate slogan, anyone?) alongside some of rock and roll’s crusty fingered founding fathers (The Rolling Stones), indie heavyweights (Sonic Youth) and gargantuan rock luminaries (Oasis). It’s an astonishing résumé, and one that reminds you of the throat-scraping anthemic power of You Am I’s music to attract these groups’ attention. Kent emphasises a balance between this kind of superstar support and more grounded tourmates.

“It’s great to play with those guys and learn from them when you know their records back to front. We’ve done crazy-stupid things too, like toured the south of the States with Reverend Norton Heat and Europe with Rocket from the Crypt.”

You Am I clearly have a deep affection for the “kooky fuckin’ place” that is the United States, having recorded in the monolithic urban sprawls of New York and LA numerous times (“why not?” was the reply when asked why). US rockers and “like minded idiots” The Strokes seemed to take a leaf out of You Am I’s book in their own meteoric rise which, funnily enough, began with a tour in Australia.

“The Strokes were pretty fresh when they came out here … Their UK agent was like ‘look, I think it would be a good move for you guys to tour with this band [You Am I] in Australia’. And so we did the appropriate thing and paid them $200 or something crazy like that,” he laughs.

“That’s what you used to get paid in America for some of those tours! But they didn’t give a fuck ‘cause the record label just funded the whole thing … a guy with a gold-plated Amex card hung around.”

The men with the mystical Amex cards are a much rarer sight in the music industry two decades on, but Kent claims we’re better off for it.

“Back then you were very reliant on the distribution gatekeepers as it were, and you had to get it in with them to get it out to people, but these days you don’t have to do that.”

Kent is assured in the strengths of bizarro Melbourne psych rockers King Gizzard and The Lizard Wizard in particular, whose own Flightless record label enabled their output of nine albums in five years. The spiritual mark of You Am I’s attitude haunts the continual mining of the Australian rock tradition here and elsewhere. Songs like ‘Purple Sneakers’, and ‘Heavy Heart’ will be sacred texts long after the group is a waterlogged ball that nobody wants to kick around anymore.

Catch You Am I alongside Hoodoo Gurus at Canberra Theatre Centre, Friday July 21 from 8pm. Tickets $59-79 + bf through Oztix.