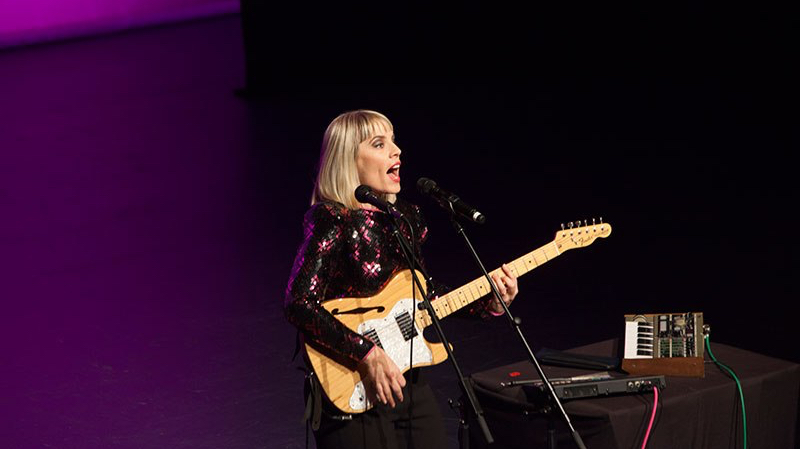 Jess Green’s career thus far has been a bit all over the place. Dragon Year is her debut EP under the PHENO moniker, and sees her stepping out with a bent for jagged afrobeat and St. Vincent art pop. Add to this her four-year-old daughter and the son she’s expecting in the coming months and Jess Green suddenly seems like the face of a different, more real side of the music industry.

We’re catching up, on her way from The Street Theatre to the School of Music, in the brief window she has before her students arrive. Naturally, she has a guitar strapped to her back.

“At 38, I just want to play,” she tells me. “The different stage name was a way of giving myself an injection of ‘be whoever you want to be’. But also, because I play so much different music, it’s very confusing. It’s things like doing an experimental free improv score to a play, or getting up and playing in an afrobeat band or the Catholics and playing jazz. It’s like, ‘who are you, I don’t know!’ So I did really want to draw a little line around this project and go, ‘this is going to sound pretty much like this’.”

Throughout Dragon Year, Green contemplates connection – between mother and child, between ourselves, our ancestors and the world around us. It’s a sub-20 minute ray of hope in a year that’s seen a decided lack of compassion when it comes to how we connect with one-another.

The elephant in the room is the ANU Bar Finale. It’s the show to which Pheno, along with local female-fronted bands House of Strangers and Betty Alto, have recently been added. Their additions come after the event promoter’s not at all measured response to questions over gender imbalance on the initial line-up. The fallout saw hate speech dividing Canberra’s music community, the withdrawal of headline acts and a callout from the ANU Union for non-male artists.

“I admire Regurgitator and Slow Turismo for pulling out of the show,” says Green. “My sister, who is management queen of the universe, emailed me. She managed to spot that the ANU Union was looking for female acts. She’s like, ‘you’ve got to write to them’. From one point of view I’m a professional musician. I need a gig. And if I worried about the commitment to diversity from every promoter for every gig I’ve ever done, I would’ve done zero.”

It’s a somewhat bleak but realistic view, and one that’s shared by many of the artists that act to circumvent the norm in a male-dominated industry. “For a young girl growing up, what she sees, she can do,” Green says. “So I think, me being on a stage is a really powerful thing. I did used to hang out at the refectory because this was when they had the underage gigs and I’d go see Tumbleweed and You Am I and it was all guys on stage. And it was definitely not as embracing for me as a young musician as it would have been if I were meeting lots of girls. And I do think the ANU Bar belongs to everyone.

“I sort of think a bigger question is how to make music sustainable as a life to choose. Apart from feeling brave enough to be a part of a male-dominated world, the next big hurdle for me is navigating motherhood and still wanting to pursue a career and still being able to pay rent and that sort of thing. There’s no maternity leave, there’s no carers leave, there’s no sick leave. For men or women, for parents trying to be artists.”

It’s a sentiment shared by Beth Monzo from local mainstays BETTY ALTO. Monzo and her bandmates have been a part of the scene in various guises for years and they understand as well as anyone how unwelcoming the industry can be.

“The lack of female representation on stage must discourage some women from taking that step from amateur to professional musician,” says Monzo. “They might think, what’s the point in working your butt off in an industry that’s super competitive, without a steady income when you’re statistically less likely to get a gig because you’re a woman?

“What some people might not realise is that whenever gender in live music is a hot topic and incidents play out publicly like this one did, it’s always female and non-binary musos that suffer most in the long run.”

But in the end, the ANU Bar will shut its doors this June and other venues will pick up where it leaves off. Whether you see a black cloud over the finale or not, those involved are out to celebrate a room held in reverence by a city so often overlooked by passing headliners.

“I’m so excited to play the ANU Finale gig,” says Monzo. “And that’s my overarching feeling about it all. Excitement!”

And there’s reason to be optimistic. No single event will undermine the work being done by promoters elsewhere in the city to foster diversity, armed with the understanding that respect and encouragement sow the seeds for great things.

“I don’t really feel the need to have a one-line statement,” says Jess Green. “It’s got to be a conversation.”

Pheno, Betty Alto, House of Strangers and many more play the ANU Bar Finale on Saturday June 17 from 1pm. Tickets $25 + bf through Moshtix.