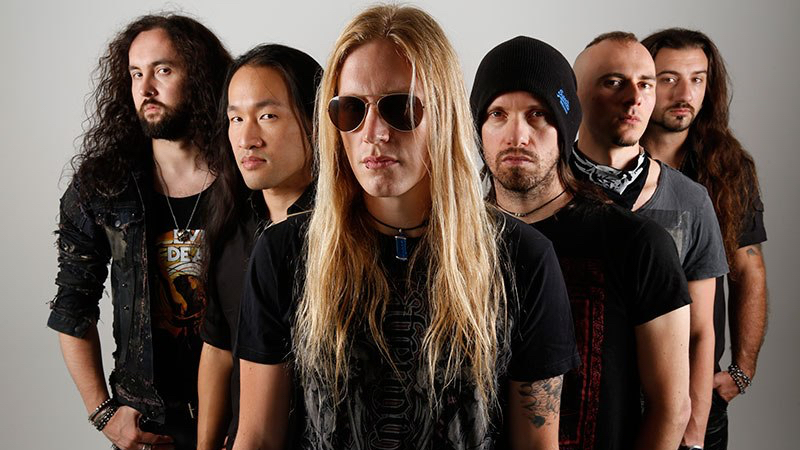 Well known for their super fast playing, fantasy song themes and links to the world of video games, British metal stars DRAGONFORCE are invading our shores in support of their seventh long player Reaching Into Infinity. With the band coming to Canberra soon, BMA had a Q&A with band bassist and guitarist Frédéric Leclercq to find out about the latest release and the direction it’s taking the band.

Why was the track Reaching Into Infinity chosen as the album’s masthead? We feel that people need escapism; today more than ever, the world is crazy. Music can bring escapism, and its power is infinite. That’s what the title is about: forget what’s around you and let our music take you somewhere else. I thought it would be nice to have the first track, which is a short instrumental, called ‘Reaching Into Infinity’. It’s a departure, an introduction, a sort of ‘let the journey begin’.

Recording of the new LP was difficult due to the frequent moves to and from the studio and live gigs. How did the band retain focus during this fragmented process? I’m not sure how we did it, but we did! In a way, it’s also a good thing to break the routine of staying in the same studio room for days. Looking back at it, maybe it helped us to remain fresh.

You have used producer Jens Bogren on the last two albums. What do you like most about working with him? Jens is a great guy, and we have most of the time the same vision about music, so to me it’s very comfortable to work with him. He is very talented and knows how to get the best performance, the best sound.

You commented that the LP was intended to bring more diversity to the band’s music. Was this aim achieved and what are the main differences between this and previous albums? Personally I think yes. One of the main differences between Reaching Into Infinity and the other albums is that I wrote most of the material. That alone means it has to sound different. Still, every musician has a strong sonic identity so at the end of the day, it still sounds like DragonForce, but I don’t listen to power metal, I’m more into thrash, death, traditional heavy metal, prog. So you can get touches of these styles here and there. Also we worked on Marc [Hudson]’s vocals and interpretation, and I think he improved a lot compared to the previous two albums.

How have the introductions of Hudson on lead vocals in 2011 and Gee Anzalone on drums in 2014 affected the band’s music? It’s hard to pinpoint one thing in particular. But of course it has an impact on the way you write music. Everything more or less has an impact. The way you feel, movies you watch, music you listen to. So having two new members makes us write music differently, to match their abilities, like ‘ha, he can reach that note, he is more comfortable in that range, he knows how to play this pattern on double bass’, that sort of thing.

Does the band use the same person for the artwork on consecutive albums and do band members have a big input into the final shape of the album cover? Yes, it’s the same person; Caio Caldas from Brazil. I think I’m the one who found him back in 2014 when we were looking for someone to do the artwork for Maximum Overload. As for the band input, well, for Reaching Into Infinity I had the concept, the main ideas, and then Herman and Caio took it from there, and we ended up with what we have now. You need to let the artist express himself, so we let him work, and change only few small details.

What is your favourite song on the new record, and why? It’s hard to tell. And it changes from an interview to another. Right now I’d say ‘Our Final Stand’. I’m very happy with the way it sounds, and I like the middle section. It reminds me of 1992 when Fear of the Dark came out. It’s not my favourite Maiden album, but it has a particular atmosphere, and I was 14 back then, and, I don’t know, it’s hard to explain, but to me it has the same vibe.

Have the notable links between past albums and video games continued with the new LP or has a move away from fantasy-focused lyrics changed this relationship? The song ‘Curse of Darkness’ is about Castlevania, which is my favourite video game series. I wrote ‘Symphony of the Night’ on the previous album which was also about Castlevania. We love video games. Indeed we are moving away from fantasy-focused lyrics … ‘Ashes of the Dawn’ talks about becoming a better person, ‘Silence’ is about suicide. It’s more diverse in that sense. We still like to write fantasy lyrics, but not every song has to be that way.