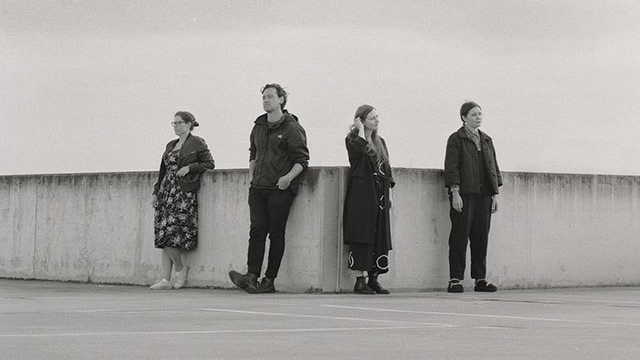 The third album from Sydney post-punk band MERE WOMEN, titled Big Skies, is a true development in the band’s traditionally abrasive sonic palette. This is the result of a key line-up change, but it’s also due to the weight that the album presses onto its core feminist theme. Broadly, Big Skies delves into women’s experiences across generations. But its most distinct focus is on women living in regional Australia – a group rarely acknowledged in any art or media. I caught frontwoman Amy Wilson on her work break to discuss more.

“A little while ago I was living out in far west New South Wales where I was working for a not-for-profit, and I spent a lot of time travelling around to different communities,” she tells me. “Through that I met a lot of women who were going through hard times because of the drought, but also a lot of women who loved that lifestyle of living in regional areas.”

Wilson’s experience in regional Australia inspired several songs on Big Skies. It ultimately drove her to dedicate the album to women living on the land, with whom she shares family history. “I just feel like I owed it to them. I felt inspired by those people,” she explains. “Living in that community myself, I really felt that sense of freedom, but also isolation – being alone, being in a place where you’re not comfortable sometimes, but also where there’s a really warm and welcoming community as well.”

The title track is a striking representation of Wilson’s experience in a regional centre. Synths and bass hurry with a sense of urgency, cramming wide-open paddocks into a claustrophobic headspace as Wilson howls hauntingly, “you don’t belong here”, “you better lock your doors”, and notably, “you better get a dog, girl”.

“That lyric came from something that someone actually said to me. Initially I was quite frightened by that, I felt like I should be afraid,” Wilson reflects. “But then, as my time went on there, I realised that it’s just a different way of living and a different way of thinking about things. Even though, to me, it seemed initially quite menacing – y’know, there’s actually some good common sense in there!”

The following track on the album ‘Curse’ is a short interlude, but it’s a powerful, introspective view into Wilson’s loneliness during this time as she empathises with being chained to family responsibilities and unable to break away from tradition. Musically it’s also a surprising direction for Mere Women, stripping down the band’s sound to Wilson’s old, echoing keys while she muses simple observations like, “look out, it’s going to rain”.

“I had this whole house, I had no furniture, and I had my music room, which was just a keyboard and a chair. So that was written, with me, in that room, drinking wine, feeling pretty … lonely,” she admits. I remark that it’s at our most vulnerable when the honest self can come out in our writing. “Yeah, absolutely. It does. When I’m recording the lyrics on the album, I want them to sound like that moment when they first popped into my head. It’s really important to train your mind to be able to jump back to those experiences in a genuine way.”

Wilson agrees that, overall, she and her bandmates have grown as musicians having written and recorded Big Skies. The album shows off a band that is willing to take risks in favour of a diversified and more cohesive sound that also expands what their music is capable of. This is owed in part to Trisch Roberts, who became Mere Women’s bassist in 2016. “It’s the first time that we’ve released an album with bass. That really allowed us all to broaden and change the way that we write.” Following such a drastic shift in instrumentation, I ask Wilson where she now sees her band’s sound compared to the early days.

“When we first started out, it was actually just Flyn [McKinnirey] and I, and a drum machine. And then [Kat Byrne] added the drums in and we played that way for five years. And I think, adding the bass to it has made it less … abrasive. We never wanted to do things the way that people thought that they should be done, so I think sometimes our music was a little bit confusing for people – it sort of jumps all over the place, it can be a bit unpredictable,” Wilson reflects. “Whereas I think it’s been a really refreshing thing to add that bass in; it gives it more drive and consistency, and of course, sonically, way more depth. Trisch has even managed to go back through some of our older songs that we still play in the set and she’s placed bass in there. She’s found this space in there that we never knew existed and it’s been beneficial even for our old songs.”

Mere Women will flaunt that live set when they play Transit Bar later this month, supported by Canberra’s very own Wives. “We love Wives. We’ve played with them before, they’re a fantastic band. We think that they fit really well on this bill,” Wilson says. “Every time we come to Canberra, we have to stop ourselves from asking Wives to play because we love them so much. And then we just end up asking them!”

Mere Women kick off their Big Skies album tour at Transit Bar on Thursday June 22 at 8pm, supported by Wives. Tickets $15 through Mosthix.