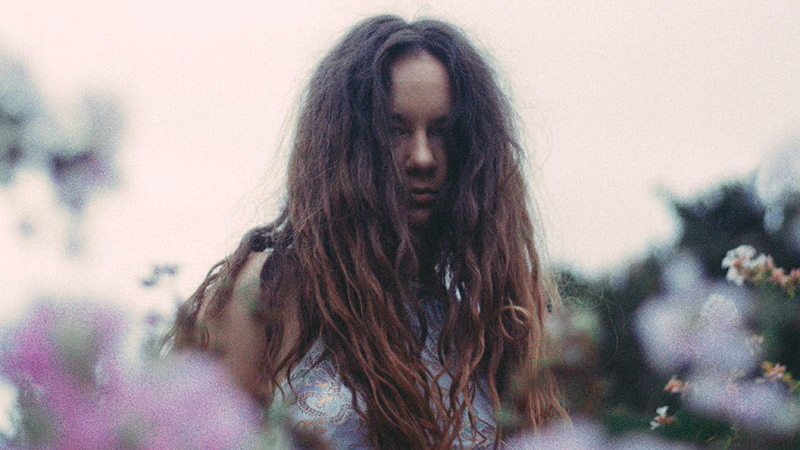 Ten minutes after she wraps up her energetic support set for Peking Duk, MALLRAT meets me outside the green room for our interview. All of 5’2”, and seeming even smaller and younger in a heavy jacket with Freaks and Geeks vibes, she greets me with a huge hug. With her is Denim, her DJ, who is more reserved, but just as friendly.

The original plan was to chat over vegan food at Sweetbones and go op-shopping (two things Mallrat – also known as Grace Shaw – does when she’s in a new city), but circumstances mean we’re now sitting outside UC Refectory as Ivan Ooze plays inside.

She’s still psyched from her set. “The audience was so, so lovely,” she enthuses, although one gets the feeling that she says that about most audiences – not in a false or disingenuous way, but just in the sense that she seems boundlessly cheerful.

I bring this up – her Twitter is similarly cheery and odd, with more than a few references to not feeling quite human at times (although her songs are often the most human of human). “Grace is part alien, part robot,” Denim laughs. “She’s a robot but she’s capable of feelings.”

Denim and Shaw graduated high school only a couple of years back, and they’ve been making music pretty much full-time since then (although Denim is in first year engineering at uni). This is a pretty cool situation for anyone to find themselves in, but Shaw finds it more than just pretty cool. “Dem and I were talking just before about how we’re always just celebrating life, and happy to be alive. It’s so great, it’s the most fun thing ever.”

She’s easy to talk to, and we cover a lot of ground, from her previous trips to Canberra – not for gigs but for a Grade 7 excursion, and a charity fundraising prize (“the prize was to go to Parliament House and meet Julia Gillard, so that was pretty fun”) – to tour mums. “Ruben [Styles, of Peking Duk]’s mum and Denim’s mum are both called Lisa and they were both born in the same year, 1968, and they haven’t met but they’re destined to meet. It’s so cute.”

The Canberra gig is the second-last on the Peking Duk tour, and after this, the duo have some breathing room. “So I’ll hang out at home and play with my dogs.” But of course, she isn’t sitting still for long – and why would she, when there are so many songs to write and collaborations to work on? The list of artists Shaw is working with (and is friends with) is dizzying.

She features on several of Allday’s tracks. “Allday and I are besties, we have matching tattoos, and also his DJ and his DJ’s girlfriend have it too. It’s like a cute little family,” and there’s a track with LANKS in the works. “I’m so excited to put out the LANKS thing, we worked on the beat together and it’s so stunning, I can’t even deal with it. It’s so good. And Cub Sport are my good friends, and we’re mucking around and working on some things.” She also works with “a lot of random people from the internet,” she says. “That’s how I like to go about things.”

She’s finishing up a song with BJ Burton, who worked on the new Bon Iver album and some Chance the Rapper stuff, and a couple of songs with Oh Boy and then Golden Vessel, which are coming out soon. “Then there’s this song, ‘Better’, with Connie (of the Belligerents, a Brisbane indie/dance outfit) that we’ve been working on for about a year, and it’s my favourite song ever, but it’s also been the hardest to finish. I think it’s because we like it so much. But we finally got the perfect mix today, so I think that’ll be out very, very soon.”

“I’ve got so much music! I can’t wait to put it all out,” she says, bright-eyed. And she’s not stopping: “My dream collaboration is Kanye. I won’t stop making music until I’m good enough to work with Kanye and he agrees.”

If Mallrat’s music seems eclectic, that’s because it is. But Grace has stopped caring about that. “I used to worry about that because I’d take it song by song, and at the end of the day I’d have all these songs and they didn’t really sound alike, but then I realised it’s not really an issue because my vocals are the carrying theme anyway. And also no one really cares about genre anymore. Like none of my friends do, their playlists just have everything.”

In fact, the music scene right now is as good as it’s ever been, as far as Mallrat is concerned. “The only thing I can’t wait for is to see more female producers come through. That would be really, really cool. It’s a pretty exciting time to watch the tides turn, it’s super cool. And it’s cool to get messages from younger girls. Like sometimes you can’t see yourself doing a job or making something until you see someone like you doing it? For me that was Tkay and Allday. And I think there have been a few people message me that I’m that for them as well, which is really sweet.”

Support Sharona Lin on Patreon!
11% complete
When we reach $500 per month we will begin the official BMA Podcast. This will include interviews with some well-known musicians and artists, tips and tricks for publishing in print and online, as well as other discussion topics around Bands, Music and Arts in Canberra!