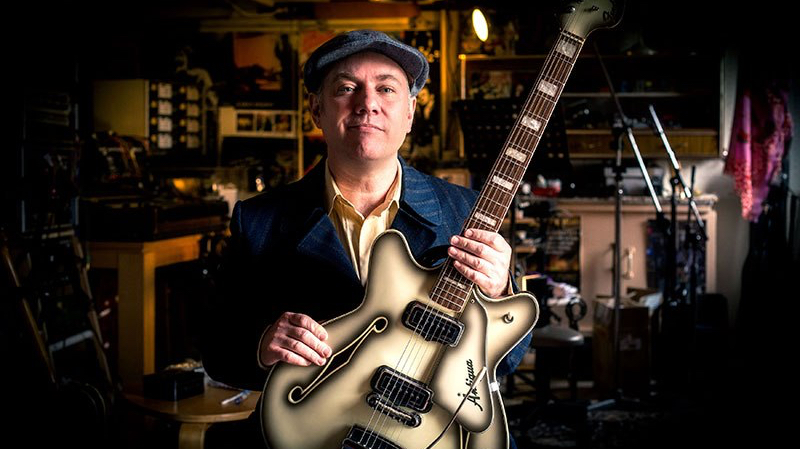 In the lead up to his tour for his latest record Alone in Bad Company, revered singer-songwriter and multi-instrumentalist JEFF LANG took a few minutes out of his busy schedule to give me a little insight into the process of his latest record and how it’s creation came about.

I usually like to start off by asking a bit of a fun question, which is: if you were a cake, what kind of cake would you be and why?

Chocolate cake. ‘Cause I’m so rich.

Wonderful. I did a little poking around, and you have said that in the lead up to conceiving an album it begins with a restlessness and a desire to create something that you haven’t heard in other records. Is there a specific moment that you achieve or touch on that sound?

It’s not so much specifically that I’m looking for this sound, I just sort of get … itchy, you know? You feel like it’s getting due or something and I’m ready to drop.

I don’t really believe in demoing songs too much, you know? If you put too much effort into demoing a song, when it comes time to record it “properly” you just end up chasing your tail trying to recapture what you had on a demo. It’s no good doing it half baked. I just kind of believe in recording stuff.

I felt like doing something, and I had new songs, so I started recording the song ‘Palmera Lad’, which is the fourth song on there. I started out just putting down the acoustic guitar, and sort of doing the song straight up, but when I got to the end of the song I got this flash of, “you should just keep going on this one chord as if there is a band playing around you”.

I just got into a trance. Then I got excited. I quickly put that guitar down and started plugging in amplifiers and running microphones over the piano, and as I’d finish each bit I’d rush over to a little amp and play a little guitar part, and then I’d add a piano, and then a bass. By the end of the day there were leads and mic stands all over the place, I’d almost boxed myself into a corner next to the recording gear. I had to pack up to get out of the room, there were leads and wires trapping me in like a spider’s nest.

‘Palmera Lad’ is one of the most fleshed out songs on the album and it really sets the tone. It’s where I got that kick and the charge of like, “okay, I’m doing something”.

That build-up at the end of ‘Palmera Lad’ was a notable highlight for me, and I particularly liked its placement quite early on the record. I’m interested to know how you go about deciding on the structure of a record in terms of track listing?

It’s the same approach each time, just basically look at what you’ve got and see what sits there and makes sense. It’s the mood, how the songs flow from one to another. The songs will all stand up individually but if someone were to listen to it all the way through, will it transition well, will things sit in a way that make sense.

It leads into the song ‘Take Me Over’, which is quite a reflective piece. Could you tell me a bit about that?

Throughout the album there are a bunch of instrumentals that weave it all together. My personal favourite being ‘Falling Down An Infinite Staircase’. How do you come up with the title of an interlude?

That was a fun one, that. I was looking at an Escher painting, I thought, “hey, that’s pretty cool, imagine if you fell down that. You’d be falling forever”. It was just a funny title. You can name an instrumental whatever you like. There was a lot of recording for this record and I was keen on including some of those instrumental snippets, and it just had to sit in the right spot. They were fun to make.

Did working alone on the record give you any insight to your own process?

Just in a general sense, it’s all about staying engaged. Whatever it is at the time, whether its playing with different people, or playing in a different studio, it’s just whatever feels like an approach that you are interested in at the time is the way to go.

In terms of playing live, how do you keep old material relevant? Is it a matter of picking old work that continues to remain relevant to you – how do you go about that process?

Well I escape one sound trap there by not particularly writing much stuff that’s autobiographical, so I don’t really have to feel like, ‘this isn’t my life anymore, I can’t sing this’, they’re stories and you create a mood. Something that really helps the old material is having new songs. You bounce the old material off the new songs in the set – you have a fresh focus. You are energized by the new.

Jeff Lang plays at The Street Theatre on Friday June 16 at 8pm. Tickets $39 + bf through thestreet.org.au.

Liked it? Take a second to support Harrie Hastings on Patreon!

Support Harrie Hastings on Patreon!
11% complete
When we reach $500 per month we will begin the official BMA Podcast. This will include interviews with some well-known musicians and artists, tips and tricks for publishing in print and online, as well as other discussion topics around Bands, Music and Arts in Canberra!