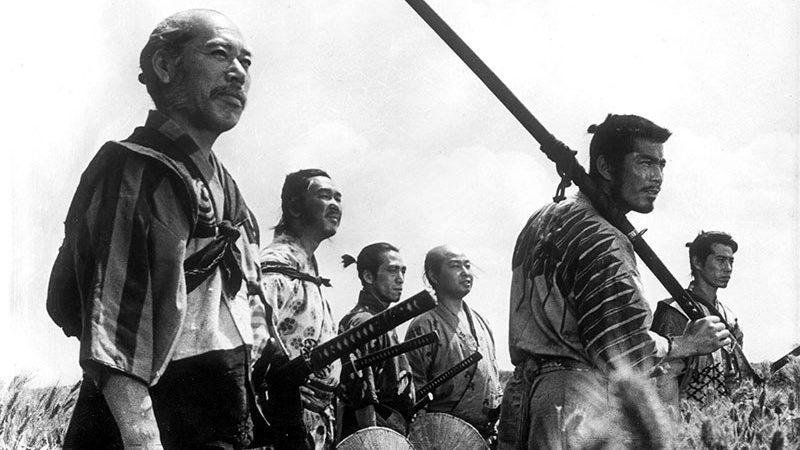 This June, the National Film and Sound Archive (NFSA) will play host to the work of acclaimed Japanese film director, AKIRA KUROSAWA. This retrospective features Kurosawa films that were carefully chosen by the godfather of Australian cinema, DAVID STRATTON. The line-up includes Seven Samurai, Yojimbo, Kagemusha, Rashomon, Ran (based on Shakespeare’s King Lear), Throne of Blood (based on Shakespeare’s Macbeth) and neo-noir, High and Low.

BMA caught up with Stratton to find out more about the enduring influence and work of Kurosawa.

“Kurosawa is unquestionably one of the great directors,” Stratton says. “[Kurosawa] had a very distinctive way, a very physical way, of getting the audience into the action of the scene. It doesn’t actually have to be an action movie to achieve that sort of thing. The way he uses the wide screen is so dynamic, the angles he uses, the cutting he employs – it really is quite startling in its visual skill. He was a great technical director [and] the stories he told were universal. Humanism is at the core of all Kurosawa films – he was a great humanist.”

Kurosawa had a mutually influential relationship with American film, and was drawn to Western culture (including Shakespeare). “I think the reason that Kurosawa’s films were the first Japanese films to be screened reasonably widely in the West, was because [Kurosawa] was a great fan of Hollywood,” Stratton explains. “He loved American films and he loved Westerns … And he was a particular admirer of the films of John Ford. So he used his love of Westerns to infuse the way he made his samurai films, and they, in turn, influenced Hollywood. Of course, The Magnificent Seven (1960) was an official remake of [Kurosawa’s] Seven Samurai.”

Seven Samurai was the first Kurosawa film, and the first Japanese film, Stratton ever saw. “I was probably 17 or 18 when I [first] saw [Seven Samurai]. I had never seen a film like that before … So I didn’t know what to expect,” Stratton recalls. To make the film length more ‘palatable’ for international audiences the film was cut by nearly an hour, Stratton explains. “So nobody in those days saw the full impact of [Seven Samurai]. It was only later when Kurosawa became really established that the original version of the film was made available in the West. Even so, [Seven Samurai] made an enormous impact, and being a fan of Hollywood Westerns, I really appreciated the action scenes in the film, especially the great Battle in the Rain, which is an amazing scene. But also the beauty of the story: these mercenaries who really give their lives for these peasants because they come to realise how the peasants have no other way to defend themselves, and how they are human beings who deserve some kind of support.”

“I first saw [Seven Samurai] at a film society and then [a year or so later] I started my own film society in my hometown. [Seven Samurai] was the first film I put on the program, [and] it was maybe the second film I screened. It was a small town and I’m not sure they were ready for it then!”

Stratton also went on to curate a Kurosawa retrospective as Director of the Sydney Film Festival in 1971, and attended the World Premiere of Ran which was held in Tokyo in 1985. “[The premiere of Ran] was a great opportunity [for me] to meet [Kurosawa] … He was a lovely man, with a beguiling smile and a very gentle character.”

While Kurosawa is largely associated with epic samurai films, he was also a master of exploring existential questions through everyday human drama. Kurosawa’s 1963 film, High and Low is an intimate, play-like piece about a businessman whose family is targeted by a merciless kidnapper. The film stars charismatic actor Toshiro Mifune, with whom Kurosawa collaborated in 16 films (and five of the seven films showing at the retrospective). “I think [High and Low is] maybe my favourite Kurosawa film. It’s hard to choose one out of all of them! I really like High and Low because if you read the book [King’s Ransom by American author, Ed McBain], it’s really interesting to see how [Kurosawa] transposes that very American story and turns it into what seems like such a Japanese film. The film is also known by the title Heaven and Hell … The way that Kurosawa shifts your sympathies is very typical of the kind of power he had to make us see that everything is not quite black and white.”

Kurosawa is arguably unmatched as an auteur: he was very precise with the use of movement in his films (both with the use of the camera and movement within the frame) to evoke certain emotions, action, or character traits. There is never a wasted moment: each creative decision is driven by purpose. “I think High and Low, from a visual point of view, is one of his most powerful films,” says Stratton. “The dynamism, of this filming, his framing and his editing and the deep humanism that he imbues in all his films, all his characters, good or bad … Everyone has their reasons. Everyone has their motives and [Kurosawa] tends not to condemn people.”

Kurosawa was plagued by ill-health, depression and later attempted suicide. “For such a great director, such an admired director, right through the 1950s and 1960s, it’s sad … to think that for two decades [1970s and 1980s], this great director was only able to make four films, and three of those were only made with the help of foreign money … It’s interesting that arguably Japan’s greatest director couldn’t get the money in Japan to make films after 1970 [or] until very much later, when he was making much smaller films just before he died.”

Stratton hopes that audiences will embrace and enjoy the Kurosawa retrospective. “Seeing films like Seven Samurai or Yojimbo or High and Low on a big cinema screen, I think is an experience not to be missed if you’re at all interested in cinema.”

Essential Kurosawa: Selected by David Stratton will be held at the National Film and Sound Archive, Arc Cinema, from Wed–Fri June 14–30. Tickets $12-$14 or season pass $75-$80. For more information, visit nfsa.gov.au.

Liked it? Take a second to support Majella Carmody on Patreon!

Support Majella Carmody on Patreon!
12% complete
When we reach $500 per month we will begin the official BMA Podcast. This will include interviews with some well-known musicians and artists, tips and tricks for publishing in print and online, as well as other discussion topics around Bands, Music and Arts in Canberra!