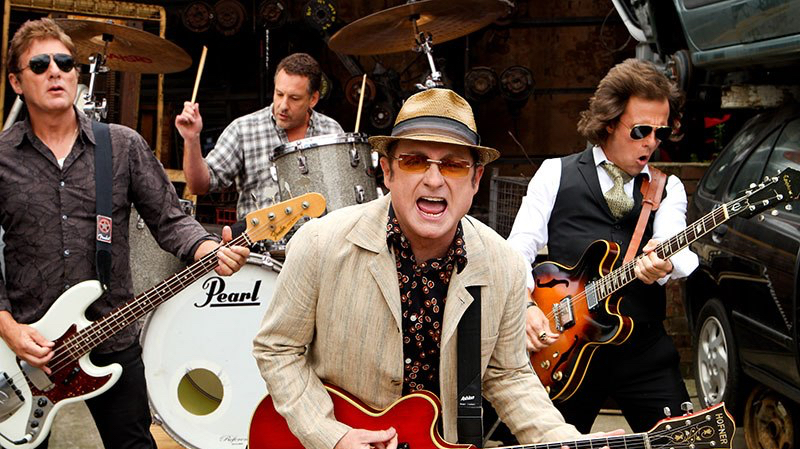 I felt like I could chat to HOODOO GURUS’ Dave Faulkner for hours. We both have a similar passion and energy for music that crosses various aspects of the art form (during the interview I discovered he is also a music journalist). The more questions I asked the more I discovered, and his energy for it all was contagious.

My initial questioning was around the energy and passion Faulkner and his band have for live performances; the group have been to Canberra twice in the past year already.

“To be honest I don’t think we play that often. But maybe we’ve been lucky to play Canberra a couple of times recently because normally it’s been few and far between.” You Am I (or Tim Rogers in particular) seem to have a similar ethic for regular live shows. I thought this might have been a commonality that both bands drew upon for their upcoming joint tour and was curious about how it all came about.

“Certainly I think You Am I are road dogs like us but I don’t actually know,” says Faulkner. “Someone came up with the idea and asked if we were into it and of course we said yes. We haven’t played with You Am I for, like, ever. We did a show over in WA about five years ago but the last time we really did anything serious together was back on their first album and we were on like our fourth or something. It was a tour with You Am I, Redd Kross and us. We go well together I think.”

As the Gurus are a bit before my time I had to do some research before this interview and was surprised to discover how popular the group is overseas, particularly in Brazil and the US.

“Brazil’s another place that’s been crying out for us to come back. Right throughout our career we were hearing rumblings of it. It was just through the fans really. We didn’t have promoters ringing us up telling us to come,” he explains. “Of course when we got there it was insane. It was the surfers, really. They’d connect with the Aussies on the surfing tours, they’d take our music back to Brazil and it got spread from person to person that way.”

I also found out that the group had previously organised their own music festival, Dig It Up. “It was a pretty ambitious thing – it was a lot of fun to do and we sort of got to be the curators of our own festival bringing out The Sonics, Redd Kross again, and The Sunnyboys. The worst part about it was that we had to play last! It would have been good to play first and get loose and enjoy the day. Normally I don’t like to stand side stage and enjoy the bands because it kind of drains your energy and you’re sort of too busy enjoying the show to focus on your own show. I tend to keep my head down but for those shows I had no choice, I had to enjoy it and charge around like a punter. There will probably be a bit of that going on with You Am I too.”

For Hoodoo Gurus, a passion for performance and boundless energy are the things that keep them on the road. It’s an intense work ethic for a band with so much success behind them already. I ask Faulkner if he’s worried about how that translates to the fans.

“We were born in the wrong time,” he says. “We had hit singles and it was not cool to have hit singles. That excluded you from being underground at that point. It wasn’t until Nirvana had ‘Smells Like Teen Spirit’ that it was okay to have a huge hit and still be a cool band. But when we were doing it, it was like ‘they’ve sold out’. But you just do what you do, you don’t write the songs with any purpose. Its all about good music and whether it succeeds or fails commercially is irrelevant.”

But even in the midst of preparations for a national tour, Faulkner doesn’t let the creative spark die out. “I’m also a music reviewer,” he says. “I write for the Saturday paper and review albums every few weeks. I’m also part of the Australian Music Prize, I’m on the panel for that which started over ten years ago so there’s a lot of great stuff out there that I get to hear.”

He explains that the key to keeping one’s band alive is to always be working through new material. “Theoretically I’m writing at this moment; I’ve put aside these next few weeks to do some songwriting. We will see what comes out of it. We just want to have some fun really. We love music. We’re kinda addicts I suppose. We’re freaks for music and there’s nothing more fun that getting together and making a racket.”

With two high-energy, passionate rock acts, this tour is sure to be one hell of a party. “We might even see if we can come up with a song that we can play with You Am I.”

Don’t miss Hoodoo Gurus and You Am I on the You-Do Gurus tour at The Canberra Theatre, Friday July 21. Tickets from $59 + bf from canberratheatrecentre.com.au.