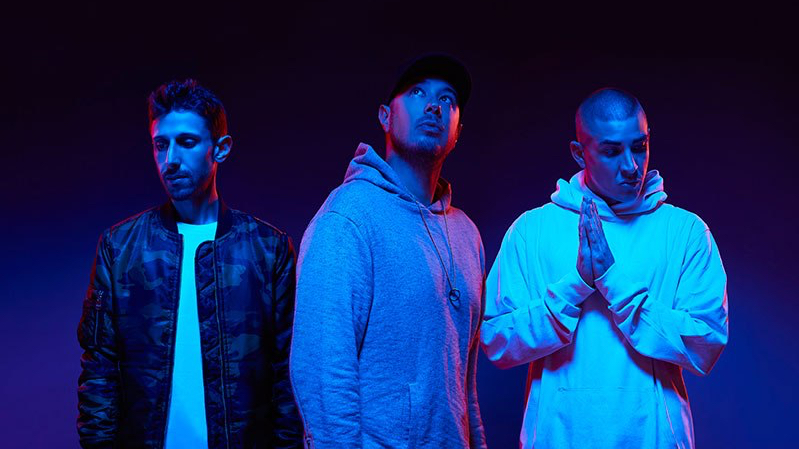 BLISS N ESO are the full package! An amazing live show with brilliant VJing, incredible rapping skills, familiar beats, great melodies, hooks and passionate lyrics. I was a bit of a slow learner, and only realised this when I first saw the group a couple of years back at Summernats of all places. I would now tout them as one of Australia’s premier hip hop, and live, acts.

A lot’s been happening for the group of late with the release of their sixth album Off The Grid, overseas touring and the death of stuntman Johan Ofner on the set of their ‘Friend Like Me’ clip. In chatting to MC Bliss (Jonathan Notley) I was keen to find out how all these things will come together when they bring their show to ANU Bar two days before the final ever concert there.

“We really opened up on this new record,” says Bliss. “Talked about some things we’ve never really talked about before. At the end of the day we just hope people kinda connect with it and get something out of it. We really delved deep. Myself and Eso have been through some adversities; giving up alcohol myself, and talk about these things in tracks like ‘Devil on my Shoulder’ and ‘Dopamine’.”

It’s the group’s passionate and philosophical lyrics that have drawn me in, so I was curious to know where they draw inspiration from and how early on they knew they enjoyed writing. “Yeah we did that at school, creative writing in class. I’m mildly dyslexic so I battle a little bit with the English language, words and spelling and stuff. Definitely it’s interesting to think that my career path uses words as its medium.

“There’s inspiration everywhere. We worked with an amazing artist Billelis, who did the front cover for us. That was just someone we found on Instagram that we approached,” Bliss explains. “These days we listen to Spotify Discover Weekly, which is pretty cool as you hear a lot of different underground artists that you might not have heard of before.”

There’s a lot of collaboration involved in Bliss n Eso, so I ask Bliss how that comes about. “Sometimes we go after certain artists,” he says. “Like Lee Fields for example; we were playing a show at The House of Blues in Chicago and when we heard his voice we knew we wanted to work with him. Somewhere along the way we had the song ‘Friend Like You’ that we thought would work and we sent it to him. He loved it luckily and he pressed it with his vocals,” he recalls. “Some collaborations kind of fall in our lap, like Gavin James’ collab on ‘Moments’. That was a case of him hearing the track without us even realising it was sent to him through someone at the label and him approaching us saying, ‘hey I love this song, can I sing it?’ and we didn’t actually know who he was at the time and he was an amazing singer so we were like, ‘yeah’.”

Aussie hip hop can be a somewhat divisive topic in music, and I was wondering about the duo’s reactions from US audiences. “When we go and tour the States, we get a vibe from the crowd after the show like how refreshing our subject matter and lyrics are. American hip hop is very inundated with ‘bitches, hoes, money, guns, drugs,’ all that kind of stuff, and I guess we’re quite down to earth in terms of the things we talk about and it’s quite relatable. To get that feedback from the crowd is awesome,” Bliss explains. “We grew up with hip hop. Having a DJ in the crew and beat boxing. So many records released just put on beats from their phone and don’t have a DJ. We were always getting comments from the crowd like ‘you guys are the Run DMC of Australia’, coz we have those old-school elements.”

The group were in the mainstream media earlier this year after the death of Johan Ofner, who died on the set of their music video, ‘Friend Like Me’. I asked about their reaction to this tragedy. “The main thing for us was that, it was a super massive tragedy that rocked all of our worlds pretty heavily and for us, we just wanted to reach out to the family and let them know that we were there for them. We were lucky enough to hold a benefit concert and raise some money for his daughter and have a bit of closure that way.”

Having supported a few causes over their career (such as donating profits from ‘Bullet and a Target’ to The Oaktree Foundation and performing at Sound Relief) I checked in to see if they had anything on the horizon and whether they actively seek out causes. After explaining that these things mostly just happen through scheduling and that the group really just like to help where they can, MC Bliss elaborated further and made me realise Bliss n Eso serve a greater cause.

“The main way we help is by making powerful music that connects with people, and touches them. We get e-mails and comments from fans everyday about how our music has helped them through some tough times, which is really the most fulfilling thing about making music. It’s really cool to see when we can connect with people and hopefully make positive change in their lives.”

The passion and energy of Bliss n Eso will be a top way to farewell the ANU Refectory. “We’ve played there a few times. First time was supporting Cypris Hill back in the day.” Bliss wasn’t aware of the venue’s closure so once informed I told him to put on an extra special show for us. “Oh you know it, you know it. Now that I know that we will.”