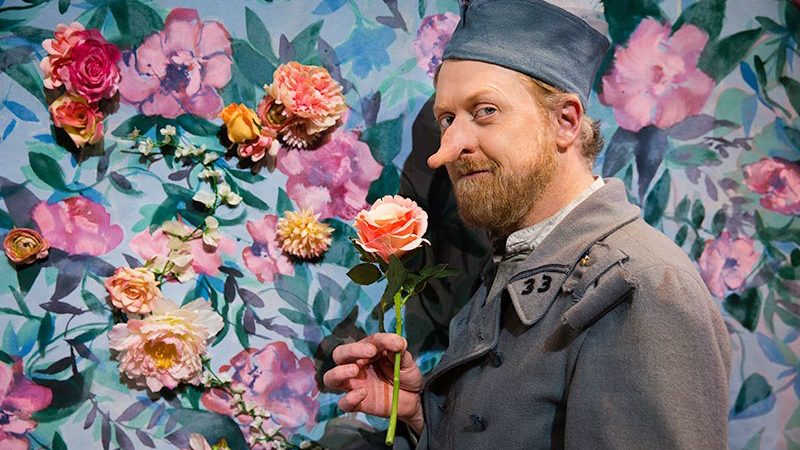 Damien Ryan has spent many years in theatre, particularly with Shakespeare’s works. So it isn’t a surprise that he is so eloquent regarding CYRANO DE BERGERAC. The 2013 version he wrote and directed was a huge hit, and his theatre company Sport For Jove are now taking it on the road – only this time Ryan will also star in it.

Cyrano isn’t Shakespeare, but captured Ryan’s imagination and has continued to do so. The classic love story featuring a man who eschews love because of his outrageous nose, and the love of his life, Roxane, is in Ryan’s opinion, one of theatre’s greatest ever plays.

“I really mean that. I mean that from the perspective that it is such a complete experience, for actors and for audiences. It’s one of the funniest plays to ever take the stage, it’s one of the most moving plays, it fulfils all the dimensions and depths of tragedy while also giving a glorious, comic, romantic plot. And he always subverts that romanticism with a great kind of cynical reality – it’s just a very, very complete portrait of people,” Ryan says.

“And even its Frenchness is enchanting, it’s an extremely passionate exploration of love, of poetic love, that goes further than poetic love – by the end of it you realise it’s actually mocking poetic love, it’s saying that there is a love that goes deeper than anything that can be expressed in words, and I think that’s the play’s great irony. The play’s about a poet, a war poet, an incredible soldier, but a soldier who has the soul of a poet, and who writes poetry, and yet in the end, his poetry is not worth the paper it’s written on compared to the real experience of loving that he denies himself for his entire life, out of fear because of his large nose,” Ryan enthuses. “It’s just a play that I’ve always loved, and so sitting down to write a new version of it a few years ago was such a wonderful challenge and it took a long time and I loved working on it. But again and again, when Cyrano hits the stage, it tends to work because it’s just such a beautifully written piece.”

Inspired partially by Romeo and Juliet, the original by Edmond Rostand was set in 16th century France. Ryan’s adaptation makes several changes, but the most notable is moving it forward in time. “It’s almost a picture book look that I’ve often seen in theatres with Cyrano de Bergerac, and I’m kind of more interested in the idea of a Wilfred Owen-like figure, rather than the crusading, almost comic book cartoon musketeer type of swordsman. I thought it would be wonderful for the audience to look at a very gritty, real, modern 20th century war poet with ink-stained fingers writing in the trenches of World War One and producing some of the most extraordinary poetry of the century.”

The character of Roxane is also updated – in this version she is a suffragette-type figure, encouraging idealism, freedom and enfranchisement for women. “So I guess there were these things in the early part of the 20th century that I found could open up new avenues for the play that are really rich and wonderful, and not keep it quite as remote from us as the 1640s.

“Also, there have been a lot of Cyranos, and people are very familiar with the play. So just to nudge it – not so contemporary that it pulls them out of the great history lesson of this play, but far enough forward that it just wakes every character up a little, and wakes the play up a little for people I suppose.”

Starring in the show (the original Cyrano from the 2013 season was offered an “incredible” role in England) is both exciting and challenging for Ryan. While he’s no stranger to a “big role” – he’s played Macbeth, Iago, and many other Shakespearean roles in the past – it adds another dimension to the play he’s written and directed. “It’s definitely a challenge and I’m biting off more than I can chew – and chewing like hell, that’s for sure.”

Luckily, he is backed up by an experienced, talented cast, almost all of whom are returning from the previous season. “Their depth of knowledge about it now, it’s reached their DNA a little bit, it’s in their bone structure somewhere now. So coming back to it now, they’re bringing depth to every moment of it.

“You sort of know when a play feels like it will work because the cast has a synergy together, and this one feels that way. I think it’s a very intelligent group, a very strongly articulate group. It’s a real pleasure working with them. And it’s a very large cast; there’s 16 people and that’s a wonderful strength to have.

“Theatre has a real paucity these days, of actors in shows, it’s all about diminishing the number of actors for economic reasons. But Cyrano is about excess, Cyrano is a really theatrical experience, so everywhere you look, there’s an actor, you know, and that’s kind of wonderful.”

Damien Ryan brings Cyrano de Bergerac to The Playhouse from Wednesday June 28 to Saturday July 1. Tickets from $25 + bf through canberratheatreentre.com.au.