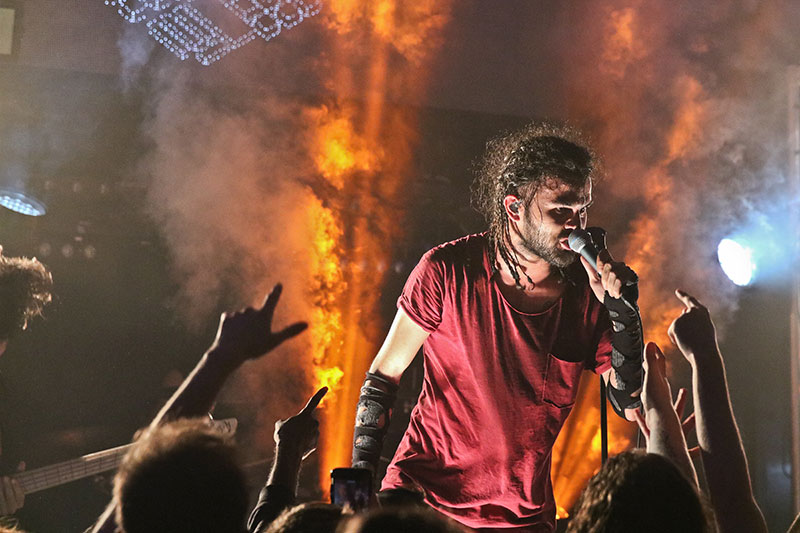 A cool, crisp night fell upon the hour of the Canberra leg of Northlane’s Intuition tour. It was their first Canberra show since Groovin The Moo in 2015 and, most likely, many Canberrean fans’ introduction to latest vocalist Marcus Bridge. Academy is not the usual battleground for a metalcore show, amongst the stairs and flashbacks of Thursday happy hour drinks. Witnessing a concert at the establishment and not stumbling around was a sobering feeling (no pun intended).

Canberra’s very own Whitefall opened the night, drawing in the first few spectators. They offered a taste of what was to come and made the most of the limited stage with their alternative metalcore sound. It was not long until post-hardcore favourites Hands Like Houses, another Canberra-born band, stormed the stage. Fan favourite track ‘Colourblind’ stirred the crowd into a frenzy of sing-alongs, a sea of bouncing heads and fist pumping. The lead singer Trenton Woodley spun and danced with the microphone, controlling the audience with every bounce and breakdown. ‘Division Symbols’ was a drum-heavy thumper. Old-school classic ‘Introduced Species’ caught the audience in a collection of hips and headbanging. We were treated to a taste of an unreleased song titled ‘Drift’ – the girls next to me erupted with “holy shit” and “oh my god” to this announcement. The lads closed their lively performance with breakthrough single ‘I Am’, leaving the audience wanting more as the band slipped behind the smoke machines and strobe lights.

Darkness shrouded the stage, mechanical and synth-heavy whirring rang like an air raid siren, a minimalistic neon backdrop appeared – here was Northlane! The dizzying smack that is ‘Paragon’ pushed the crowd into an impromtu circle pit. The five-piece all donned matching disheveled outfits (think less Devo and more post-apocalyptic/steampunk … Mad Max with drop tuning?). Their latest album Mesmer had only been available since late March but every crowdsurfer, headbanger and slight foot tapper knew every single word to every new song being played for their first time. The latest single ‘Citizen’ was great to see live (the music video is a fever dream of silhouettes).

Lead singer Marcus Bridge thrusted the microphone into fans’ faces to join in mid song, a highlight for any fan close enough to shout along. They played my favourite track ‘Leech’; a drum-pattering, distorted guitar cacophony. Admittedly I sang along like a suburban mother at a Celine Dion tribute show: “Follooww meee underrr waterrr”.

The fivesome mixed in some gems from sophomore disc Singularity like ‘Dream Awake’, but once the material like ‘Dispossession’ from the untouchable debut album Discoveries hit, the mosh pit turned in to a tornado. Even I could barely contain myself, turning from sophisticated wannabe journalist to mosher. Despite how many times I had watched the band live over the years, this song still conjured up my inner metal kid.

Lead single from Mesmer ‘Intuition’ was another crowd titilater. “Question everything you know!” the crowd chanted back right before the end breakdown. Show closer was the classic ‘Quantum Flux’, a song that broadened Northlane’s fan base back in 2013. The end was nigh – the lights darkened and the band dispersed. The crowd chanted “encore, encore, encore!” until we got exactly that in the form of the guitar chugging single ‘Obelisk’. The fans shouted out the lyrics, “I will show you fear in a handful of dust!” before stirring one last circle pit. A fitting end to a spectacular show as the crowd shuffled out of the venue and up those same old tiresome stairs. Not many rock ‘n’ roll shows occur at Academy but this was surely one for the archives.

Support Andrew Myers on Patreon!
9% complete
When we reach $500 per month we will begin the official BMA Podcast. This will include interviews with some well-known musicians and artists, tips and tricks for publishing in print and online, as well as other discussion topics around Bands, Music and Arts in Canberra!