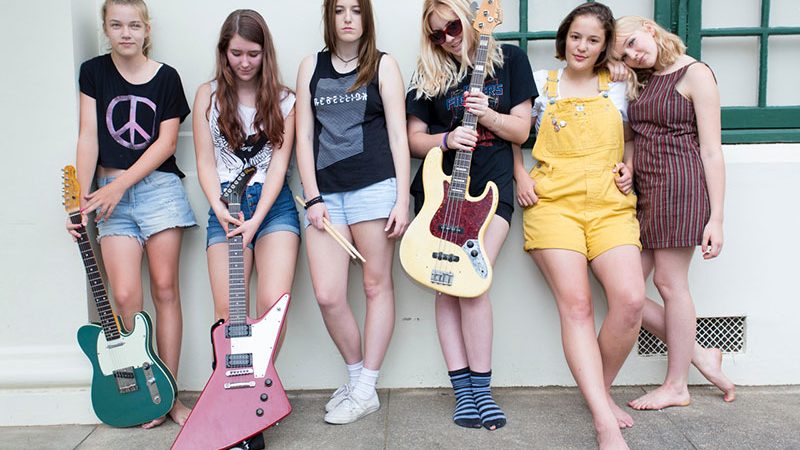 GIRLS ROCK! CANBERRA is an initiative aimed at encouraging young girls and gender-diverse youth to try their hand at music and activities related to the music industry. The program runs for a week, and includes a mix of music lessons, band practice, creative workshops and live music, culminating in a performance by the campers. Founded by local musician Chiara Grassia, who developed the program after attending several Girls Rock Camps in the US over the past few years, I recently had the chance to speak with Chiara about what she has planned for campers in 2017.

“It’s a week-long program for girls, trans and non-binary youth from the ages of 10–17 to learn an instrument, form a band and write an original song. At the end of the week, the campers will perform their songs at a showcase,” Chiara tells me over the phone, on our mutual lunch breaks. “Last year campers had the option of picking either vocals, drums, bass or guitar to learn during the week. This year we have expanded the choices for musical instruments to include electronic music – this will include making beats, messing around with Ableton, maybe some DJing.

“We encourage the participants to try something new and express themselves in a safe and supportive environment, one where they’re not judged and are free to make mistakes while developing new skills,” says Chiara. “This program differs from other youth music programs, in that no previous musical experience is required, and we welcome all skills levels,” Chiara tells me.

The attendees are guided by female, trans or non-binary mentors, to ensure campers feel like they have a connection with the person that they are learning from. The mentors are still being confirmed, but they will be local musicians or people in the music industry. “During lunchtime we will have some great live performances, as it can be hard for underage kids to see live music in Canberra due to the lack of all ages venues,” Chiara empathises. Last year the camp featured lunchtime performance from one-off supergroup Pleasure and Pain (Courtney Barnett, Jen Cloher and Steph Hughes) plus The Rangoons, Wives and Aphir.

“In the morning, campers will attend instrument instruction, then watch a band while eating lunch, and in the afternoon work on their song in band practice and attend creative workshops,” says Chiara. “There will be workshops on songwriting, music history, zine-making, as well as workshops encouraging and empowering campers to be more comfortable and confident in themselves. Last year we had workshops on Self Care, Gender and Feminism 101 and Improv Comedy, and hope to run similar ones this year.”

This year marks the second that Girls Rock! has run in Canberra, and Chiara has hopes that it will continue to run into the future. “We ran our first program last year in January and it was a success, with campers and volunteer mentors travelling from all over Australia to be a part of it. It’s inspired other Girls Rock! Camps to start in Melbourne and Brisbane,” Chiara notes. “Last year we ran on a shoe-string budget but we still managed to accommodate everyone’s needs, including offering financial aid to those who requested it.” Even on a tight budget, the 40 odd campers that attended in 2016 were inundated with volunteer mentors from all over Australia and New Zealand, including Nicole Gaffney (from Carb On Carb), and of course Courtney Barnett and Jen Cloher. It was also the first Girls Rock! Camp to be held in Australia, alongside other camps in Canada, Japan, Iceland, Brazil, Bahrain, Sweden, France and Germany.

On the topic of expanding Girls Rock! to include trans and non-binary identifying young people, Chiara believes diversifying the camp keeps with its strong inclusive message. “Music scenes and the music industry can be really cliquey and male dominated. With Girls Rock! Canberra, we’re creating a space where young people can express themselves musically and creatively, and build confidence in their abilities,” she explains. “When setting up the program we are very conscious of the language that we use, and I think it’s important to make sure that the program is as inclusive as possible.”

It’s especially true that the staff involved in Girls Rock! aren’t only mentors, they’re also role models. “It can be hard to imagine yourself doing something, like playing music, unless you can recognise yourself in someone who’s already doing that thing. Our program is a space where youth can hopefully see themselves in the mentors who are helping them, and be inspired to pick up a new instrument, play around in a new genre or learn a new skill like making zines or screen-printing shirts.”

As for the future of the program, Chiara is hopeful that it’ll run again. “We would love the program to become financially stable so we can keep running future programs, and are working towards this,” she says. “This year we’ve been fortunate to receive an ArtsACT Project Funding grant, which will allow us to pay all our mentors, rather than relying solely on volunteers. We’re looking into other ways to fund the program, and encourage anyone interested in supporting GR!C to get in touch with us.

“We were recently contacted by Rose of Dead End Design, who makes these amazing zines called All GRRRL ASSAULT, featuring her illustrations of women in punk and hardcore alongside inspiring quotes and song lyrics from them,” Chiara says. “She wasn’t able to help out in person at the camp, but has offered to donate sales from her latest issue to GR!C.” If you would like to support the program, the best way is to contact Girls Rock! Canberra directly via their Facebook, Twitter or their website.

Support Andrew Nardi on Patreon!
7% complete
When we reach $500 per month we will begin the official BMA Podcast. This will include interviews with some well-known musicians and artists, tips and tricks for publishing in print and online, as well as other discussion topics around Bands, Music and Arts in Canberra!