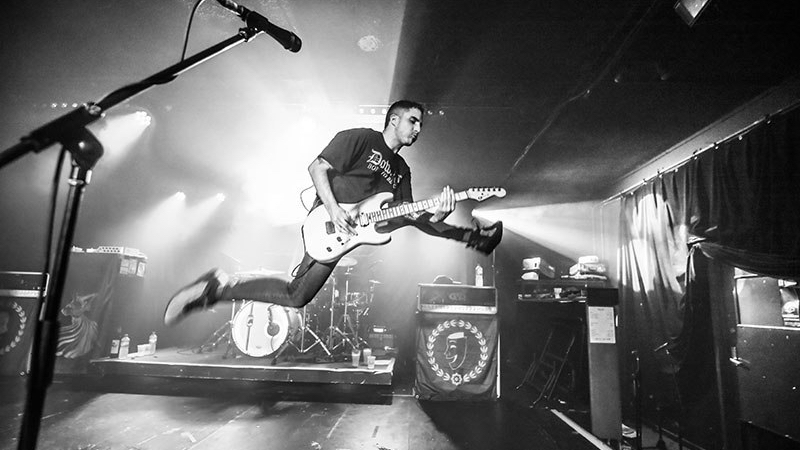 Hellions have sold out four out of eight shows of their latest tour promoting their third and arguably most powerful album to date titled Opera Oblivia. The band are staples of the UNFD company family, among the home born talents of The Amity Affliction, Northlane, In Hearts Wake and Tonight Alive and many more internationally. Hellions are arguably my favourite band under that company’s banner with their emotional, politically charged and chaotic live shows, and lyrical content that often shows the silver lining and optimism to most situations. Lead single ‘Quality of Life’ demonstrates that with the line “you could be happy, if you wanted to be”. The metal scene needs more bands like Hellions that preach this mindset. Admittedly, it is cathartic to mesh such positive views with moshing, but at the end of the day that is what music is – a release.

Tonight’s stomping ground was The Basement in Belconnen, a staple for rock and metal shows, and one of the last establishments in Canberra that predominantly offer heavier bands a place to call home. Opening the show were Newcastle-based triple j Unearthed alternative rock newcomers Introvert, and Brisbane metalcore outfit The Brave. The latter drew in a steady crowd, pulling in the patrons who were just idly huddled by the pool tables and bar – either arms folded, bobbing their heads or rolling a ciggie (it was torrential outside, good luck with that).

Endless Heights controlled the crowd with their energetic pop-punk/hardcore songs. Each time I have seen them live the band give it their all and put the crowd’s interaction first – mic grabs, crowdsurfing, the works. Endless Heights were the hook, line and sinker; the appetiser, for the main course that were goddamn Hellions!

Hellions rose from the darkness of the stage, smashing into Opera Oblivia’s anthemic opener ‘24’, complete with a full crowd chant of the final clap-along lyrics: “we are born and raised as cattle to be the same, but we are not the same, we have to change and if we don’t we’ll suffocate, won’t we?” Fan favourite ‘Nottingham’ was another sing-along spectacular and mic drop-a-thon. The setlist stepped back to their killer debut Die Young with the single ‘The Penultimate Year’, an absolutely fun mosh song. Unfortunately, that was pretty much the only song from Die Young we were treated to (really, no ‘Infamita’?). The self-titled single ‘Hellions’ from Indian Summer brought out the crowd’s inner rap artists with the JJ Peters and Real Bad from Deez Nuts cameo section. ‘He Without Sin i) Hallation’ was an emotional scene, a song pressing on injustices within the Catholic church, and hate crimes.

Second single from Opera Oblivia ‘Thresher’ brought us all back down to melodic town, plus any chance for a good sing-along with the universally relatable lyrics, “I hate the radio” and “fuck you for not being strong enough, for letting me bare the weight of both of us”; it was like musical heroin. For me, this song made the show – there’s just something so grungey and upbeat about it. But much like the circle pits, spin kicks and mosh pits, it all must come to an end. We were treated to the encore of the bouncy, thrashing single from Opera Oblivia, ‘Quality of Life’. Once the crowd dispersed the few stragglers were able to pose with members for Instagram-worthy selfies, get t-shirts, posters and setlists signed. The catharsis had ended, but not the rain or the ringing in my ears. I clutched my newfound prizes to my chest (signed setlist and cassette) and legged it home, still humming, “You could be happy, if you wanted to be”. Thank you, Hellions.