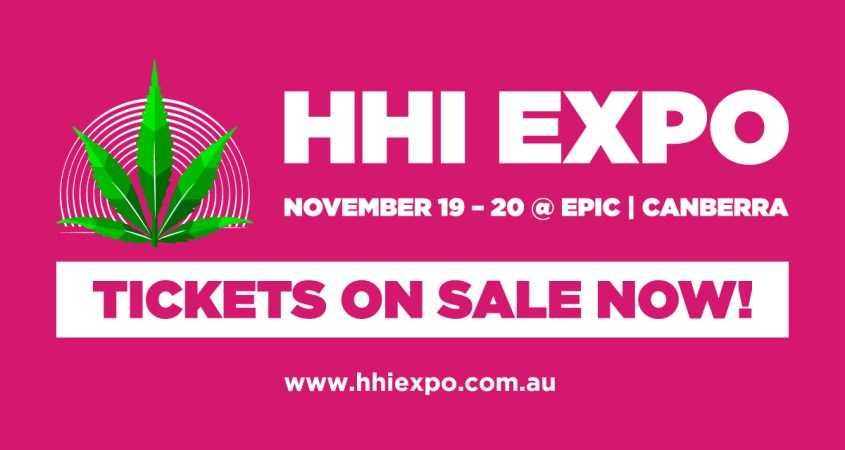 The HHI Expo (Hemp Health & Innovation) is almost upon unsuspecting Ken Behren’s and it was high time the BMA got wind of the event and its motivations.

Heaps of benefits to this misunderstood plant

Resident BMA marijuana culture expert Buddy Waters talked tight with the event’s Co-Director Evan Alexander and discovered that the expo has lofty goals that go far beyond red-eyed recreational frivolity and considers the immense health, investment, and economic benefits of one the world’s most maligned and misrepresented plants.

For a start, this isn’t the first event the team has put together. It’s the only event in Australia of its kind for ANYONE seeking information and greater awareness around all the crucial benefits the hemp and cannabis plant has already unlocked. Not to mention its sustainable solutions for the future. Previous events have been running over the past five years and has seen attendance of well over 50,000 interested Australians.Medicinal use of Cannabis is still a recent development for many Australians. I asked Evan Alexander what are some of the key areas that people are gaining therapeutic benefits from that perhaps aren’t well appreciated in the community?

“I think that’s just the thing, due to the stigma, prohibition and associated legislation around cannabis in Australia and indeed the world up until the last 10-20 years odd,” Evan states.  “We haven’t quite had the time and funding invested to know yet.

“Obviously clear results have come back as pertains to things like anticonvulsant properties, epilepsy, multiple sclerosis, glaucoma, cancer (chemotherapy), IBS, chronic pain, Parkinsons and more, but medical research into cannabis and its ability to treat illnesses is still in its infancy.”

And there’s more, as Evan explains.

“Therapeutic uses of cannabis date back to antiquity, of course, particularly in China, India, and the Middle East. They treated everything from constipation and paralytic infectious diseases to pain and nausea but it’s really only been since the ‘90s that the effects observed for centuries have begun to be investigated scientifically.

“But that’s one of the many reasons we hold the expo. If it’s happening, it’s here.”An increasing number of economies are benefiting from cannabis investment. The US has exploded and Thailand – where I recently visited – has embraced it as a tourist and health industry. How do we compare in Australia, and is Evan seeing similar investment albeit on a more conservative scale?

“The short answer is slowly, yes,” Evan says. “And NOW is the time to get involved. Though a somewhat fledgling industry in Australia, what that means is we have the opportunity right now to influence how it develops.

“Which is not only extremely exciting but absolutely crucial.

“Hemp seeds were only cleared for human consumption in Australia in 2017,” he continues. “Legislation to allow for prescribed ‘medicinal’ use arrived in 2016, but of the 260,000-odd prescriptions handed out since then, half of them were in the last 12 months. So in many ways, we’re just getting started.”

Evan is able to spot what will further help this culture grow.

“Legislation is one thing but logistics, culture, and education are another entirely. They all need to be nurtured at a number of levels in order for the ‘industry’ to develop.

“For example hemp is a brilliant sustainable building material, but if you’re going to build ‘at scale’ with hemp, then ultimately you need a mill to process it, farmers to grow it, tradies to work with it, and so on.

“It’s an extremely multi-functional plant, which is why it’s so intensely revered and holds the magical position for health, culture, creativity, humanity, and planet earth that it does.

“So as an expo, what we do is bring ALL of those facets together for everyone to experience and learn about – in one place.”

The Expo also promised to have pathways and networking opportunities for visitors to explore cannabis industry investment.

“For that, we have the VIP networking party on the Saturday night of each EXPO for our exhibitors, speakers, and all of our VIP ticket holders,” Evan details. “So you get the cream of the industry all coming together with anybody who is interested in doing the same.

“Throw in dinner, a bar tab, our headliner bands, DJs, and a set of weekend tickets and it’s one hell of a party to boot.”Of course, key to the growth of the industry lies in the relaxation of laws. Given his position, does Evan advocate for, or have any influence over, legislative change to help grow the industry?

“Yes, but our role as an expo is more to bring together everyone who does or wants to,” he explains. “From Legalise Cannabis Australia to a wide range of advocates, political parties, doctors, allied health professionals, industry experts, academics, scientists, authors, filmmakers, patients, and others. You name it, they’re here.”

The talk of here and now leads to the subject of looking to the future, and the next 5 -10 years, particularly around the subject of changing laws in regards to recreational use of cannabis; even the prospect if it being sold commercially through a retailer.

“If I knew the possibility of that, I would tell you,” Evan says.

“The short answer, again, is that’s one of the many reasons we hold the EXPO. Obviously various countries and territories around the world have a range of different legal and cultural parameters in place so part of that also includes learning from them.

“Many people are familiar with the situation in the US, the Netherlands, Canada, and recently Thailand, but there’s many others like Israel, Portugal, and Germany through to Uruguay and South Africa.

There’ll be something for everyone

“For us it’s about bringing everyone together to look at what Australia’s own distinctive set of circumstances should look like.”With events in Sydney and Brisbane, the ACT’s more liberal laws for cannabis earmark Canberra as a natural choice for the expo. Does Canberra expo offer opportunities the other states don’t?

“Indeed, our very first Canberra HHI, we’re thrilled to be here,” Evan enthuses. “The obvious difference is yes, the ACT has a more progressive approach to cannabis legislation than the rest of the country in that adults can possess up to 50 grams of dried cannabis, up to 150 grams of fresh cannabis, grow up to two cannabis plants per person, four per household, and use cannabis in their own home.

“But the main difference for this event is that given the 19 & 20 November dates fall at the end of spring, for our Canberra event we’re upping the festival vibe. We’ve got a two-day program chock full of bands, artists, DJs, food trucks, indoor and outdoor exhibitors, as well as camping tickets for the first time ever. It’s a good excuse for road trippers and/or folks that want to make a weekend of it.”

For interested parties, online single day tickets are $20 and weekend passes are $36. VIP ticket packages are also available, giving you a weekend pass plus entry to the Saturday night industry networking party, dinner, as well as a starter bar tab, bar and headliner entertainment.

You can find out more at the HHI website www.hhiexpo.com.au. The event is held at Epic on the 19th and 20th of November, whilst the VIP party is round the corner @ Thoroughbred Park. Check out the ‘HHI EXPO Precinct’ map and artist line up here. Shuttle buses will run 5 to 10.30 pm between EPIC (EXPO & Carpark), Thoroughbred Park (The VIP Party), the light rail station (city) and EPIC campgrounds.