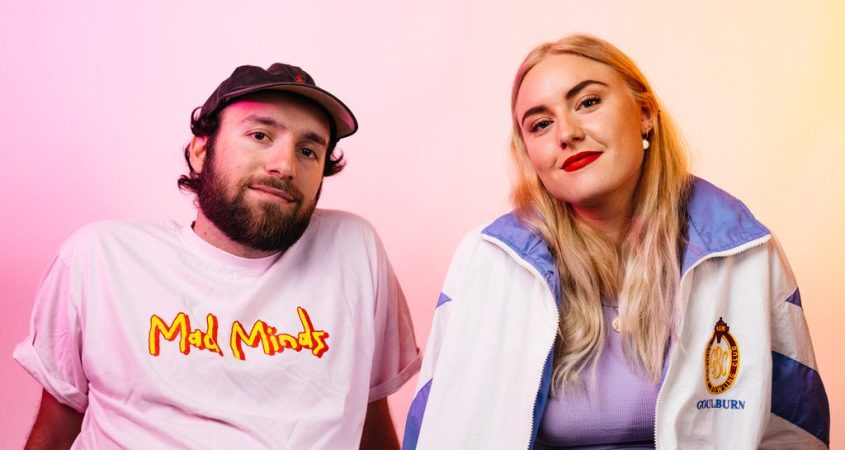 Canberra twosome Miroji’s story is a fascinating one, from their name, to their formation, to the dancey-glitchy electronic sounds that they ply on major stages today. As such, it’s about damn time we got to know ‘em a little better, eh?

Gogo: It’s a bit of a random one … Miroji means ‘Michael, Ron, Jeff’. When I was little, my family and I were watching a small folk cover band at the local music club made up of some people my parents knew – Michael, Ron, Jeff, and Tony. They didn’t have a name and so each week passed around a hat for suggestions.

My brother and I thought of ‘Miroji Toad’, made up of the first letters of all of their names. But they DIDN’T CHOOSE IT.

So, when George and I wanted to upload our first song and we weren’t having any luck finding a name he called me and said, ‘Just give me a name and I’ll upload that right now’.

Our apologies to Tony, who no longer features in the name… perhaps the ‘Toad’ is just silent?

George: In around 2018, I randomly started learning how to make beats for our friend AJ, who raps. I don’t really play any instruments so I would just mess around with samples. One day, I made a track which AJ really liked.

We immediately thought it’d sound great with a hook, and I knew Gogo had always sung but never really for an audience, so we called her up to come over to his house and sing a hook. I then kicked AJ off the track (sorry AJ) because I actually thought it sounded really nice with Gogo singing.

Gogo: My voice was shaking from the nerves of singing in front of G and AJ and you can still kind of hear it on the track because we only did one or two takes.

From there, we released that as our first track, To My Vibe, and started working more and more. We mainly did it throughout uni to procrastinate from study.

George: Our songs are dancey and electronic, sometimes kind of intense and dramatic. We’ve moved away from slower chill, indie sounds and closer to dance, mainly because we’ve started doing a lot more live shows.

We’re just trying to make tracks to have fun with on stage.

I love dabbling in different genres, so some of our songs have more trap/hip hop elements. I’m really looking forward to our next few releases which are shaping up to be very electronic and glitchy!

Our favourites are our more recent tracks, so probably Satisfied Minds and Empty Air.

What are your influences, musical or otherwise?

George: Although both of us listen to, and are influenced by, a huge range of genres, our main influences for Miroji are artists like Flume, Flight Facilities, SofiTukker, Confidence Man, and AlunaGeorge. I listen to a lot of rap, trap, and electronic stuff which influences the beats, and Gogo has grown up with a bit more rock, jazz, and blues which you can sometimes hear come out in her voice.

We’re also influenced by the energy and passion of lots of our friends who are also Canberra artists –  ARCHIE, Parklands, Sesame Girl, Neko Pink, Sputnik Sweetheart, Lucy Sugerman, Kirkland… too many to mention!

What are some memorable experiences you’ve had as a band?

Gogo: One of the most memorable experiences was a show we played a few months ago. I think it was our first show that went really well. We didn’t ever intend to play live when we started making music and we’re not naturally born performers, so it’s definitely hard for us to get used to being in front of people.

It was the first show that we were super comfortable in and could see people really responding to the music. We were jumping around, going crazy, and from there we’ve become more and more confident with each show.

Gogo: We both love meeting and hanging out with new people. George literally has more friends than anyone I know, so working on projects and getting to play so many live shows gives us the opportunity to just become friends with some awesome people in the scene.

Everyone supports each other and is simply keen to work together on awesome projects. We’ve also reached out to some really big Aussie names for technical advice and they’ve been super supportive and helpful.

George: I don’t know if this is our proudest moment, but there was a funny one after releasing our first song. We got the first Spotify royalties which was barely enough for us to share a burrito. We were super chuffed and just sat down together feeling really proud and eating our burrito together.

We’re super excited to be playing at Stonefest and Spilt Milk. We feel so lucky to be a part of Canberra’s music scene, and even just being considered for such amazing festivals.

We’ve got a few projects coming up. Firstly, as mentioned, we’re super excited to play both Stonefest and Spilt Milk! We’re also finishing up a few songs to be released in the next few months and working with a local videographer on some music video ideas.

We’re also working on some designs for merch too, which should be fun!

Gogo: George has been doing an impression of Donny from The Wild Thornberrys recently for some reason. It’s been crackin’ me up. I think he cracks himself up too.

We’re just super fortunate to be surrounded by such amazing talent in Canberra. Not just in the music space, but in the creative scene as a whole. Canberra has some of the highest concentration of talent in the world.