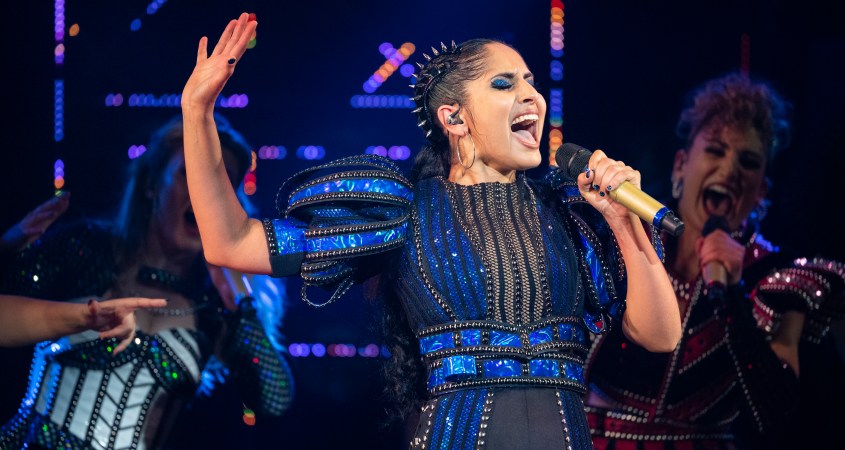 SIX The Musical takes the best-known facts of the six wives of Henry VIII, adds a little detail and invents a little more, and interprets the events through a very modern, somewhat outraged, filter to deliver an energised musical that turns the history of the time into a boiling pot of fun.  With its six performers — the wives — belting out more than a dozen musical numbers in pop-diva form, all while dancing fit to burst, the musical could hardly be better designed to awaken a young person’s interest in medieval history.

Of course, its primary effect, sensory rather than exploratory or philosophical, comes from the musical output and the visual phenomenon, which is quite something.

The music itself might have seemed far more ordinary, though, without the almost perfectly tuned interlacing of nicely judged harmonic dissonances throughout.  And the show’s most amusing aspect was its other dissonances: lots of one-upmanship between the former queens, as a competition for most-hard-done-by queen formed the thread running through the entire performance.

The show’s publicity material fairly warns of strobe lighting, theatrical haze, and loud music, but the strobes and theatrical haze were minimal.  And the music was loud, but, aside from a driving bass making itself heard before all else, it was well balanced.

What the publicity glosses over, though, is the imaginativeness of the stage lighting, from both off and on stage.  The word spectacular doesn’t do the lighting justice, and neither do production photos.  It was amazing, and the production made great use of it to dramatise the women’s costumes and, at the show’s finale, to fling excitement literally into the air.

The songs themselves may not  (at least on first exposure) have stood out as ready for recall, but the dancing did.  Whilst the dance patterns may have been similar from song to song, every dance displayed enviable strength and endurance and, above all, exquisite coordination among all six.  And coordination of all that with the backing band Ladies in Waiting and the sophisticated light show added a further note of memorability.

Its global season understandably interrupted recently, SIX The Musical has become, since its original days as a student production in 2017, a self-perpetuating publicity phenomenon, cloned on various stages around the globe simultaneously.  Its Australian production, which stars performers who have stared in any number of big productions (and, in one case, on ABC television), has opened in Canberra after its second season in the studio of the Sydney Opera House and will go on to Adelaide, Melbourne, New Zealand, Brisbane… and possibly other places, seemingly on the strength of its audience members’ unbridled enthusiasm.

The youngest of these may not have understood all of the sexual jokes and double-entendres, but they certainly absorbed the spirit of rebellion, heard the drumbeat of joy, and shared in the sheer enthusiasm that the entire performance exuded.