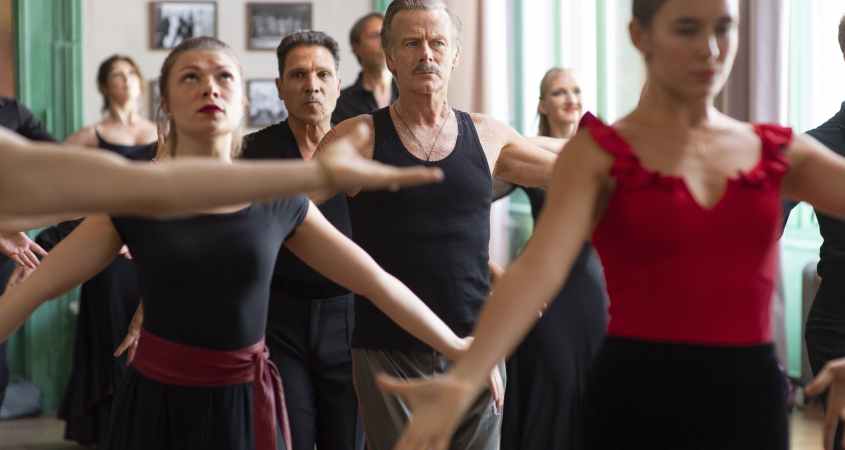 Is it possible to undo or to atone for mistakes long past, or at least to repair the resultant damage?

When provincial school-bus driver Tony (Franck Dubosc, who also wrote and directed the movie) faces the possibility of sudden cardiovascular death, he acts on a desire to reconnect with the family he abandoned twenty years earlier: first, his ex-wife, Carmen (Karina Marimon), now very happy in a stable long-term relationship, and then through her his daughter, Maria (Louna Espinosa), now a top-flight dance instructor in Paris.  Realising that his daughter remembers nothing of him, and on the advice of his workmate Gilles (Jean-Pierre Darroussin), he decides to let Maria get to know him before announcing that he is her father.  And that means learning to do something he has always regarded as only for sissies: dancing.

Learning that Maria doesn’t take beginner students, in order to pass a dancing audition with her, Tony turns to his neighbour Fanny (Marie-Philomène Nga) for help in the basics of Congolese rumba.  These early lessons with Fanny work well enough for Maria to accept Tony into her class.

Tony’s opening steps as a student of dance and of human connection are stumbling, and Maria cuts him little slack over any carelessness.  But reconnecting with her matters more to Tony than he’d imagined, spurring him on to do his best.  On the other hand, Maria has a full life with her work and her man.  Does she even want to know her father?  Once she learns who he is, will she hate him?

Rumba Therapy is comedy above all.  Yet it has its moving moments, and the vulnerabilities of several characters imbue it with an emotional depth that will leave you warm and tickled.