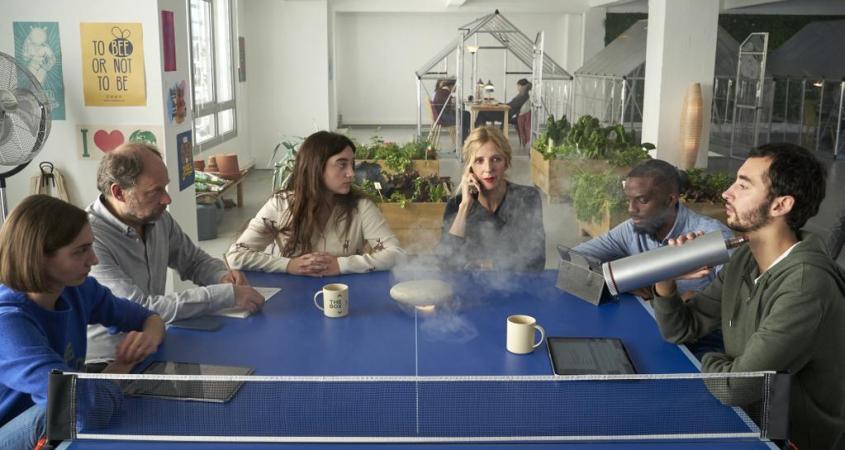 As if saving his marriage didn’t entail cheerfully facing enough challenges — preparing meals for the kids, getting them to and from school and day care, getting to appointments on time, dealing with vehicle problems, facing loan pressures, keeping up with the washing and housework, in fact everything while his wife is away — Alexandre (Denis Podalydès) learns that, for the job that will get him through it all, the boss, Aymeric (Yann Frisch) imposes one ironbound prerequisite: Alexandre must have no kids.

This looks like disaster until Alexandre turns to somebody he has just met and helped out, Arcimboldo (Denis’s real-life brother, Bruno Podalydès, who also directed the film and co-wrote it with Denis).  Arcimboldo is glad to help out, but he has his own jobs, and they call on his time unexpectedly.  This becomes a juggling act of cataclysmic proportions once Aymeric assigns Alexandre to assist account manager Séverine (Sandrine Kiberlain).  Séverine’s own life has its challenges, and Aymeric’s expectations for his employees to participate in various outlandish social activities at the most inopportune times strain even her tech tolerance.

Whether Denis will make it through his first day, let alone through his probationary period with the somewhat loopy tech company, will depend on how deftly he can continue to outwit both Séverine and Aymeric for long enough to keep the kids occupied and fed and even read a story at bedtime.

A madcap comedy for our technomad times, French Tech relies largely on understated acting that suggests characters who, though not quite in control of their lives, their reactions, or their facial expressions, do their best to maintain an effective façade of habituation to the wizardry and random uncooperateveness of modern technology.

A great story.  See it if you can.