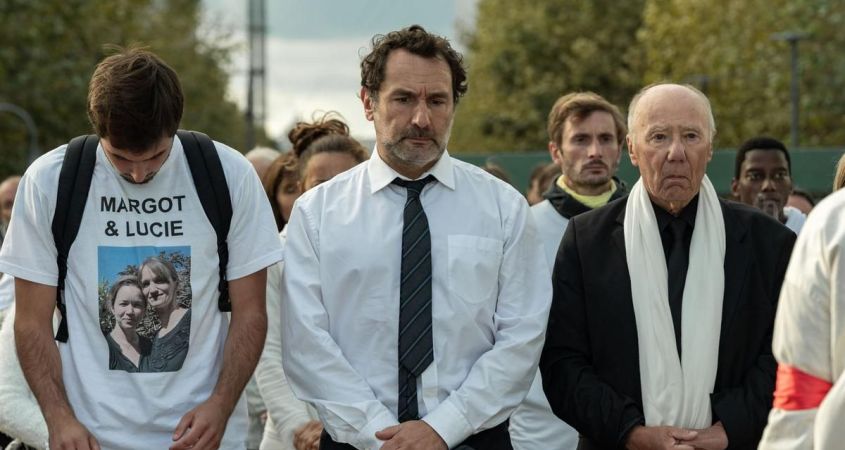 The Goliath of this story is the fictitious Big Ag company Phytosanis.  Phytosanis manufactures a pesticide, tetrazine, that causes severe birth defects and fatal cancers and has even been declared a carcinogen by the WHO.  Naturally, Phytosanis has no intention of limiting its sales and is relying on its chief lobbyist, Mathias Rozen (Pierre Niney), to maintain his habitual but convincing lies to ensure that the profits keep rolling in.

To the company’s victims and their relatives and communities, after decades of deformity and death, Phytosanis’s lies have become intolerable.

There’s France (Emmanuelle Bercot), whose community activism against pesticide poisoning has taken a personal turn because her partner, Zef (Yannick Renier), is dying of it.  And there’s the official ignorance of the cause of death of farmer Margot (Elodie Martin) that finally drives her partner Lucie (Chloé Stefani) to attract attention to the issue in the most desperate way.  And there’s the lawyer who has been representing her in trying to call tetrazine’s manufacturer to account and have its sale banned in Europe, Patrick Fameau (Gilles Lellouche), who finds himself under increasing pressure to let the case go.

Behind the scenes, Phytosanis’s tactics are even less savoury than its straightforwardly refutable declarations of fact.  Knowing that a potential European ban on tetrazine will come to a vote in six months, Rozen and his team prepare a document smearing the scientists who, without financial ties to the company, support such a ban; they wine, dine, and sweet-talk government ministers; they undermine public discussion with armies of netbots and trolls.  In short, they do all they can to subvert democracy and due legal process.

With only the vaguest notions of these activities, Fameau and the activists he represents pursue legal suits and publicity campaigns.  But Phytosanis is fully prepared to turn up the heat on them all, complementing its character assassinations with death threats and physical attacks.  Who will give way first?

Goliath is well worth watching both for its plotting in surprising corporate slyness and for many individual performances.  Great camera work ranging from steady closeups to large location shots that convey the scale of public reaction to Phytosanis’s indifference to the suffering it causes, Goliath makes for fine drama.  Bercot’s and Stefani’s impassioned performances, Lellouche’s great use of facial expression, and Niney’s unusually dark character with an angelic veneer combine to provoke in the viewer a sense of disquiet and disgust at the corporate shenanigans and sympathy for the all-too-human pain at stake.