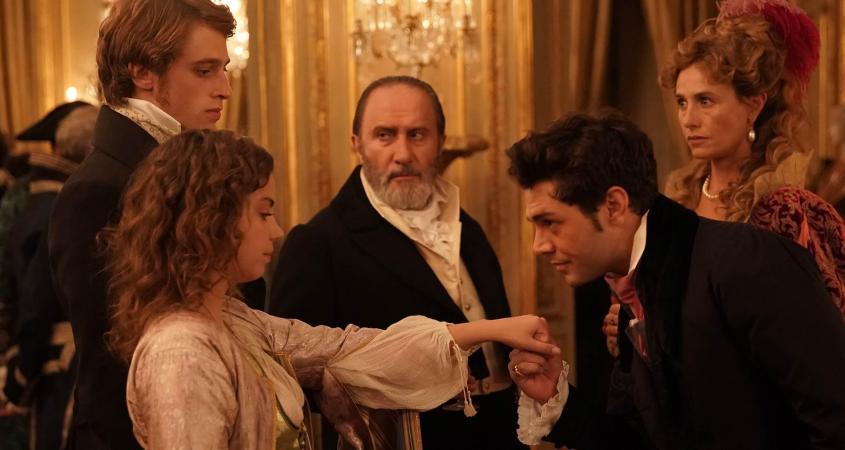 Boy, Lucien (Benjamin Voisin), meets girl, Louise (played by Cécile de France).  Louise’s husband accordingly sends her to Paris.  Lucien follows Louise but hasn’t the connections or the money to join her social sphere.  But while there he falls in with media-startup troublemakers who live on libel, bribery, corruption, and contrived controversy.  A poet himself, Lucien appreciates good writing but reveals himself to have no scruples about joining in destroying reputations, including that of a fine writer, Nathan (Xavier Dolan), who has offered Lucien nothing but friendship and help.

Then Lucien unaccountably falls for girl number two, Coralie (Salomé Dewaels).  An actress, Coralie spends her money dressing Lucien to suit the part he hopes to play in high society.  Others too, including Louise, Nathan, and important book publisher Dauriat (Gérard Depardieu), spend money to help him.  Lucien repays them all with carelessness or worse.  And he may or may not learn a lesson from the results.

That is the essence of Lost Illusions, a film adapted from Honoré de Balzac’s novel, set in the years 1837 to 1843.  It’s a film in which at no point the protagonist becomes a character you’d like; those he sets out to hurt are by and large easier to relate to; and nobody but he is to blame for his choices and their outcomes.  In fact, by ever so subtly taking us into various points of view, the film shows the social limitations under which most lived even in high society.

Most revealing of all, though, is the film’s depiction of the motivations of the mass media of the time to stir up faux controversies and thereby create bidding wars for favourable media coverage, the corruption’s root lying in corporate structure and shareholder power.

What Lost Illusions fails to offer in a sympathetic protagonist, it makes up for in revelations of human motivation and more than makes up for in its beautiful cinematography and costuming; its scenes of society, street life, and occasionally glorious food; and in our sympathies with several of its other characters.