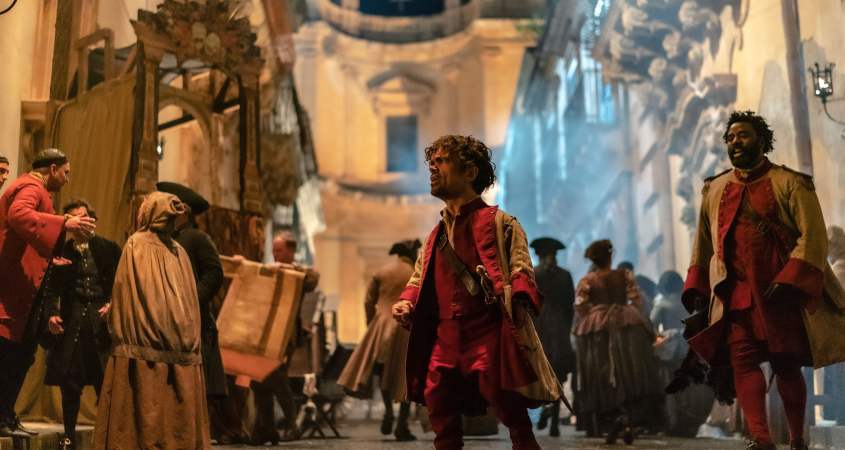 An unlikely actor as the unlikely swashbuckler with a love unlikely of requital, Peter Dinklage plays a version of Cyrano who, albeit with a proportionate nose, considers himself a freak unworthy of the love of his childhood friend, Roxane (Haley Bennett).  And Roxane herself has no hint that Cyrano holds more than friendship for her in his heart.

When Roxane’s eyes meet those of a stranger, Christian (Kelvin Harrison Jr), she is smitten, as is Christian, and learns all she can of him before asking Cyrano to help them meet.  Cyrano, unable to make her unhappy, unhappily obliges.  And so begins Cyrano’s counterfeit of his own poet’s soul as Christian’s, through an outpouring of poetry, love letters, and extemporised prompts in Christian’s name.

Dinklage and Bennett’s roles as Cyrano and Roxane respectively reprise their roles in the 2018 off-Broadway stage-musical adaptation of Edmond Rostand’s play by Dinklage’s wife, Erica Schmidt.  But Joe Wright’s film direction and Harrison’s additional ideas have enhanced a script that Schmidt had already brilliantly honed.  (The play’s most wordy worthy speeches were turned into song for the musical by twin musicians Aaron Dessner and Bryce Dessner and married lyricists Carin Besser and Matt Berninger.)

Though the notion of such noble and tragically misguided selflessness in furthering a love match for a rival through falsehoods has never struck me as terribly credible, the subtleties that Joe Wright brings to the film, along with some additional wrinkles by Harrison, have made of Schmidt’s adaptation a sublime romantic drama whose central tenet it makes almost believable through the sheer brilliance of the film’s acting, directing, and singing, assisted in no small measure by perfection in costuming, lighting, and choreography.  Its sole weakness lying in several jarring and frankly unnecessary concessions to present-moment normative insensitivities in a couple of the lyrics, Joe Wright’s Cyrano otherwise beautifully showcases the integrated emotional experience that artistic talents can create in film when together they manifest their shared love for a deeply romantic tale.