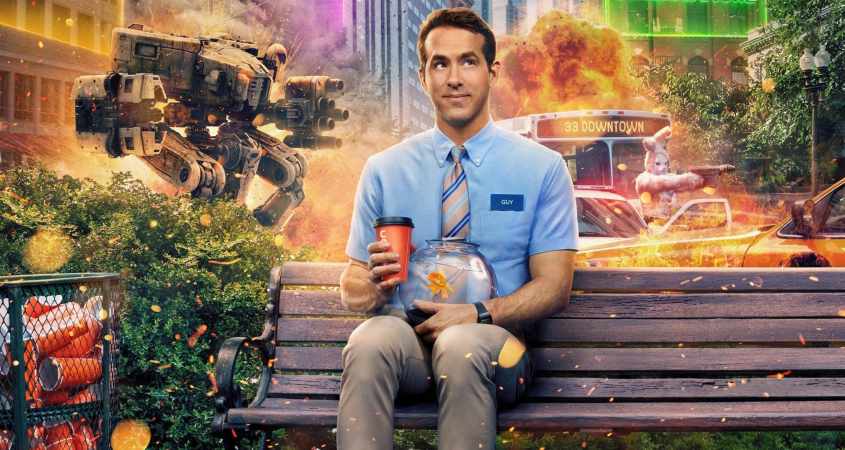 Guy (Ryan Reynolds) is a good-willed, perfectly ordinary man.  Differing from those around him only in knowing exactly what the girl of his dreams looks like, Guy follows the same routine every day, listening to the morning mayhem on the news; picking up after a robbery on his way to work; sidestepping bullets, death rays, and explosions; and farewelling every customer with the same sincerely meant slogan.  Until, that is, the girl of his dreams appears before him, shaking up his limited reality and motivating him to find her.  Actually, of course, this girl, calling herself Molotovgirl (Jodie Comer), is no ordinary girl: she is from another world, and he has no chance with her unless he can show her his mettle.

What Guy doesn’t know is that he is a non-player character (NPC) in a massive online video game — and that Molotovgirl, whose real-world name is Millie, has entered the game to find evidence against the game’s owner, the evil Antwan (Taika Waititi, impossible to dislike even in the role of a ruthless villain).  But Guy’s heart is in the right place, and he knows his world well; he has a chance to both impress and help Millie and to free all the innocent NPCs from their usual roles as bored bystanders and victims of “first-person shooter” game players.

But will Antwan delete him first?

Taking place largely within the videogame world, Free Guy could easily have fallen into corniness or predictability; or equally easily have fallen into over-reliance on childish reactions, impressive explosive effects, and jargon penetrable only by tech heads.  It does in fact initially present challenging novelty to those who have never before seen a video game; but it transcends the video-game and pure-action genres through its appreciation of ethical conundrums, complex emotionality, and human interdependence, and Reynolds is consistently hilarious as the eponymous Guy.  The film is a comedy romp, and it is in fact utterly charming, and worth seeing at least once.  Catch it while you can.