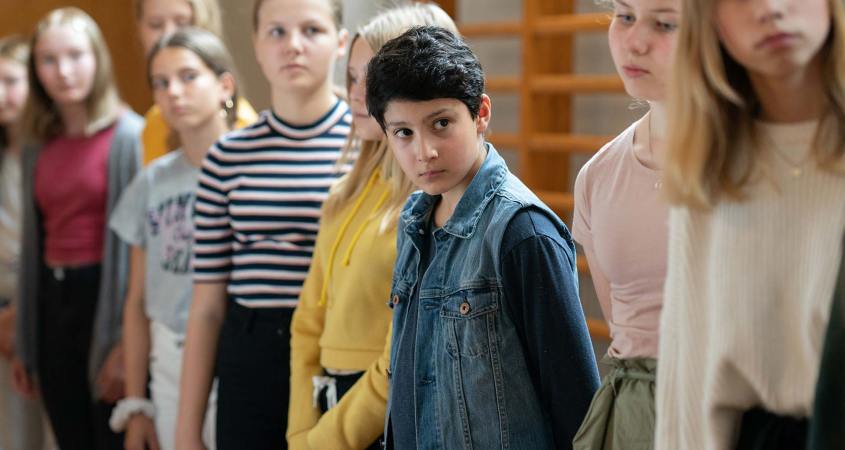 A sympathetic look at the life of refugees awaiting an asylum decision in relatively comfortable refugee accommodations in Finland, Any Day Now focuses on a fictitious Iranian family, the Mehdipours, specifically giving us the viewpoint of the family’s son, 13-year-old Ramin (Aran-Sina Keshvari), as he negotiates school, friendship, and romantic attraction amidst uncertainty as to whether he’ll still be in the country in a few weeks.

Ramin’s little sister, Donya (Kimiya Eskandari), though five years younger than he, knows Ramin and the school system well enough to pull a prank or two on him.  And Ramin in turn, with the help of his mother, Mahtab (Shabnam Ghorbani), is not beyond pulling a prank on his father, Bahman (veteran actor Shahab Hosseini).  The family is gentle; considerate toward outsiders as well as toward its own members; patient; and worried, for if their appeal for asylum meets with no success, they will be deported back to Iran.

In the meantime, the members of this close-knit family have clearly made the best of their lives in Finland.  And gradually it becomes apparent that the emotional wellbeing of the entire community rests on people’s interdependence, their dependability, and their willingness to pitch in.  The Mehdipours take the local bus into town for food, clothing, and school supplies; Ramin meets his friend Jigi and others for adventures; and the family has made close friends of an older local couple, Onni and Helena (acclaimed real-life couple Eero Melasniemi and Kristiina Halkola, who have often acted together).  Ramin and Donya have picked up Finnish well enough to attend mainstream classes at school; and Ramin is consequently confident even on his first day of high school.  Will Ramin’s developing sense of his place find its completion in this friendly Finnish community?

Any Day Now loosely originates in the childhood experiences of its director, Hamy Ramezan, who co-wrote the screenplay with Antti Rautava.  This is not Ramezan’s first film about Iranian refugees: he also made the 2015 documentary film Unknown Refugee [Tuntematon pakolainen], documenting the travels of Iranian-Finnish Ali Jahangiri as he accompanies refugees from their landing in Greece on their overland journey to Finland and witnesses their encounters on the journey.  But Ramezan uses the advantages of fiction to show us what experiences and longings reside in the heart of its focus, young Ramin, and thereby adds to our sympathy and empathy with the delightful learning experiences of a young man in surroundings of good will.