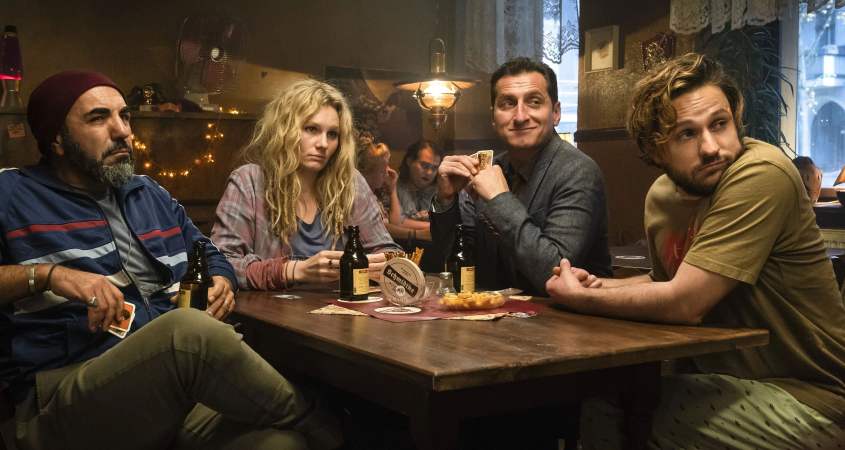 Marc-Uwe (Dimitrij Schaad), an anarchist musician, pedantic about language but a slob in his daily life, answers his flat’s door to a friendly communist kangaroo asking, in Aussie-accented but perfectly fluent German (voiced by Marc-Uwe Kling, author of the screenplay and, earlier, the book about his adventures with the kangaroo), to borrow ingredients to make pancakes — and neither of their lives will ever be the same again.

Theirs is not at first an easy friendship. Clashing in their tastes, personalities, and ideologies, the two nonetheless support each other in standing up to the system. The kangaroo even offers advice on when Marc-Uwe wants to ask his glamorous, aloof neighbour Maria (Rosalie Thomass) to go out. And they and Maria must band together when a hard-right-wing ideologue, Henry Hübchen (Jörg Dwigs), announces that he’ll be building his headquarters, in a tall tower, right next to their flats.

Complete with unmistakeable Trump references and analogies, The Kangaroo Chronicles succeeds in giving it to right-wing absolutism and thuggery even as it celebrates friendship and romance, all laced with clever antics that keep anything from getting too serious. The kangaroo animation has won awards, and rightly so: the roo’s body moves with utter naturalism, and some of the facial expressions are priceless. This is a movie you may want to see more than once. Catch it while you can.