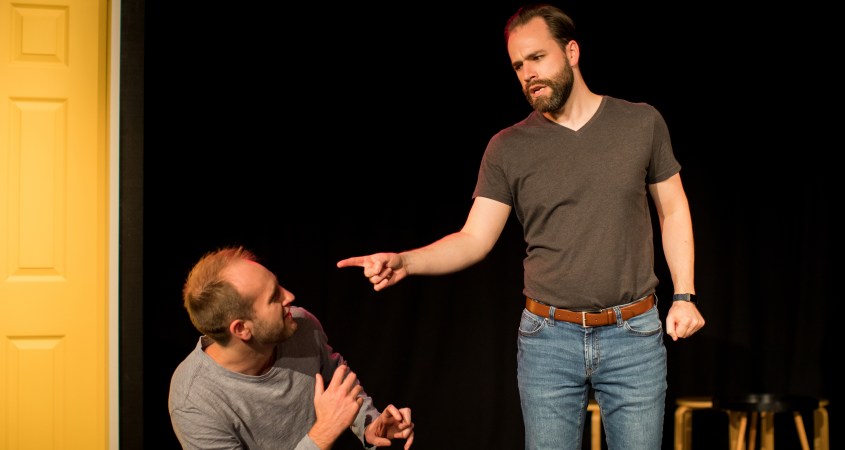 An evening’s improvised theatre at The Courtyard commenced with hostess Amy Crawford’s warmly received cheerful introduction to improvised theatre’s mechanics: essentially, unscripted performance in response to audience suggestions. The audience needed no encouragement to join in.

First to take up the improvisational challenge was The Mavens, a singing trio accompanied on keyboard intuitively and sensitively by Alan Hui.  Taking its cues from the life experiences of audience members, the trio made up its numbers as it sang. Moving from one genre to another, including blues and country, it turned heartache, missed opportunities, and regret into five tongue-in-cheek songs on what we all feel at some time in life. It had many audience members laughing at themselves.

After interval, that night’s actors introduced themselves — their fictional selves, including their fictional motivations, again selected through audience acclaim.  The audience then deciding whose story they wanted to follow, an intricate and ever-evolving production unfolded, each character responding to whatever mad turn of events emerged. And there were plenty of those, leading to playful vignettes in which we could all identify someone we’ve met.

Setting the mood musically for this was gifted pianist Ella Ragless, who, watching the action carefully, introduced emotional highs and lows as the action unfolded.

The Door’s cast reshuffles, from performance to performance, amongst Amy Crawford, Angie Ford, Ella Ragless, James Lim, Jeremy Strasser, Kit Berry, Luke Atchison, Lou Maconachie, Laura Griffin, Michael Carter, Millie Hayes, and Ryan Erlandsen.  If those performing on this night were typical, Lightbulb Improv’s performers are naturally comical, with excellent timing. Performers inhabited characters intuitively, as though born to them, and responded to one another at a second’s notice.

The Door was a fine example of the humorous spontaneity that even young amateur performers can call on after some training and practice.