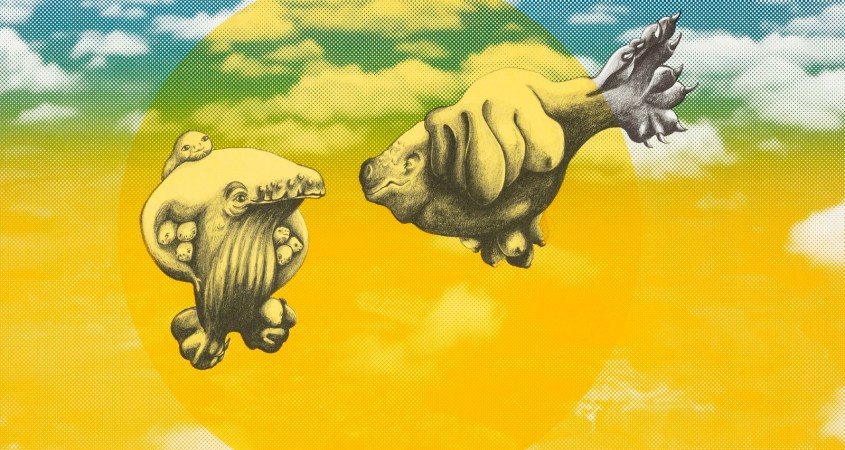 Never in my wildest did I think the word “Skywhale” would come out of my mouth, nor could I forsee scribing this fantastical name even once, let alone as many times as I now have.

But how incredibly glad I am, not only write and talk about the Skywhale and now, Skywhalepapa, but also have the opportunity to sit down and chat with the artist, Patricia Piccinini, and Canberra musician, Jess Green (aka PhEnO), about their collaboration on the song We Are The Skywhales.

Now, if you’ve not yet listened to the song, stop, head to your fave digital streaming service and give it a spin. Isn’t it divine? Quite frankly, how could it not be, having been written by Green, one of Canberra’s most prolific and successful musicians.

Green has enjoyed an amazing music career since graduating with First Class Honours from the ANU School of Music in 2001. She’s been a session guitarist for some of the country’s biggest musicians, sharing stages with the likes of Clare Bowditch, Deborah Conway, Katie Noonan, Tim Rogers, and Urthboy.

I met up with these two beautiful, creative women at The Street Theatre (where PhEnO happens to be playing a show on 10 April, but more on that in a bit).

Piccinini recalls how the two met and started working together.

“We have a friend in common called Nell. She recommended I check out Jess’ work. I really connected with it. I loved the ideas in it, loved the music quality, and I really loved her voice. And I said to Nell, ‘do you reckon I can contact her?’ And she said, ‘of course you can!’”

Nell, also an artist, who has recently been part of the Know My Name initiative at the National Gallery of Australia (NGA), had previously worked with Green and seemed to know that she and Piccinini might be a good fit.

A few emails later, the ball was rolling.

“I remember the moment we first talked really clearly,” Green recalls. I was at the Boundless Playground with my kids…and I sat in the carpark [on my phone] looking at the sky and remember seeing clouds right next to the Carillon. It was a visceral moment, talking about the ideas and looking at the sky and this other Canberra icon”, laughs Green.

When you listen to the lyrics of the song, you can almost envisage part of what Green might have seen in these first moments.

Green talks more about her creative process in composing the fun, whimsical, and catchy tune.

“I felt the responsibility of talking to Patricia’s ideas. So I took that very seriously. But I also felt super free and joyous because I was allowed to just make my work.”

Green says the project gave her a huge amount of freedom to move forward. In other songwriting projects, where she has been restricted by certain parameters, this collaboration was unique in that she was allowed to just make art the way she does it.

“That’s why it worked out so well, because it is your best work”, Piccinini says to Green. “You’re not emulating anyone else, you’re doing you, and you’re the best at it”.

I could tell by the way that Piccinini and Green interact that the two have great respect and admiration for one another and their work. Piccinini says that she knew Green was the right person to work with because their “interests and values overlap enormously”.

Both women, who have spent a large part of their lives based in Canberra at various points, find a lot of meaning and symbolism in what Skywhalepapa (complete with skywhale babies riding on Papa’s back) represents about masculinity, particularly about the nurture and caring of small children. Both artists are mothers and both identify with their husbands being the “Skywhalepapas” in their lives.

“In my partnership, we’ve taken turns with who stays home and who goes to work, because we’re both creatives. But, in general, in Western society, in some industries, that’s resisted,” says Green.

Piccinini adds that Skywhalepapa is an important mirror to hold up to Western society about the positive changes around masculinity, and also show men that care and nurture are an important, if not vital, part of masculinity.

“In the ‘60s and ‘70s you were ‘letting down the side’ if you, as a man, walked down the street holding your child’s hand, because that’s not what masculinity looked like.

“Now, you go to the Balloon Spectacular and you see lots of men holding their kids, and that’s a really fantastic thing that’s happened. So let’s celebrate it; let’s mirror it back.”

We Are The Skywhales wasn’t originally part of the Skywhalepapa commission, the project initially just being about the balloon. But, as time went on, Piccinini felt that her newest majestic creature needed a soundtrack to accompany his official launch into the world. Together, Skywhale and Skywhalepapa now form a family of beautiful, yet unusual creatures of flight.

If you want to hear this amazing song live, there are a few upcoming opportunities where you can do just that.

The final Skywhale Family Flight, run as part of the NGA’s Know My Name, will be happening on Friday, 3 April at 5:30am. Green and her band draw you in with a beautiful soundscape as the balloons inflate, and I hear it’s all kinds of incredible. Piccinini herself describes this experience as “alluring, atmospheric, and welcoming”. Tickets are free with booking and can be made through the event specific website – knowmyname.nga.gov.au

And finally, as mentioned earlier, Jess Green (aka PhEnO) has a show at The Street Theatre on Saturday, 10 April. She’ll be joined onstage by some seriously incredible musos, including Alyx Dennison on synths, James Hauptmann on drums, and Lachlan Coventry on bass.

Along with We Are The Skywhales, PhEnO will perform some new and never-before-played music. Having opened for Joan As Policewoman and The New Pornographers, as well as Odette and Moaning Lisa, you can rest assured that the quality of the music you will hear at this show will be more than deserving of your time, money, and attention.

And if you’re only new to the Canberra Skywhale phenomenon and want in on the beautiful community it’s creating, the lyrics of the chorus to We Are The Skywhales is as good a place as any to start:

Fire down in our bellies
Catching the wind in our tails
We sail up and up above you
We are the Skywhales!

PhEnO (+ Band) will be performing at The Street Theatre on Saturday, 10 April at 8pm. Tickets are $32 full/$29 concession and can be purchased from thestreet.org.au