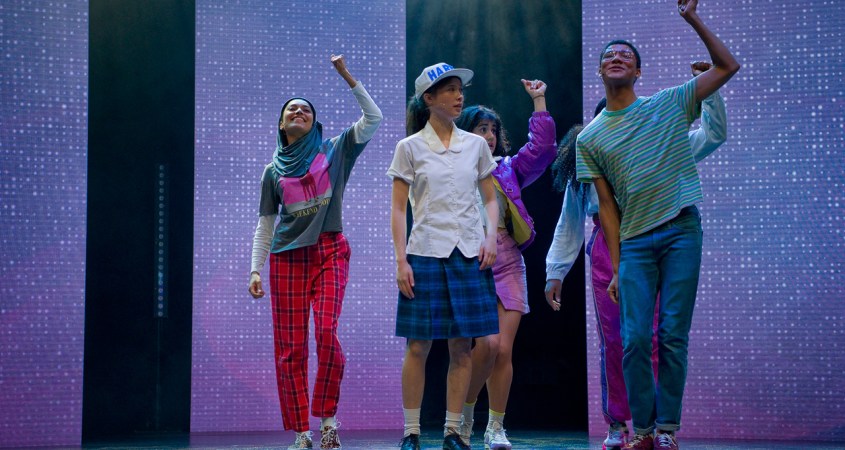 Fangirls revolves around the sensation that a fictitious band’s lead singer, Harry, has stirred up in one of his millions of 14-year-old fans, Edna. Edna believes that, unlike his 38 million other fans, who adore Harry simply because he is famous, she truly understands that he is lonely, depressed, and trapped in the entertainment world by his managing company. Edna will be his salvation, if only she can find a way to meet him. And, though he doesn’t mean to do so, her online fanfic-writing buddy, Salty, eggs her on in plotting a devious scheme by which to achieve that.

But that means first of all managing to attend his only concert in her home town — presently Canberra! — and nobody is going to help her get there.

The character of 14-year-old Edna is played with remarkable verisimilitude by the relatively experienced Karis Oka, complete with the naïvety of a 14-year-old’s unrealistic understanding of the world but with the daring too of a 14-year-old determined not to let her only chance at true love slip through her fingers. And Edna’s friends Jules (Chika Ikogwe), Lily (Ayesha Madon), and Brianna (Shubshri Kandiah) hilariously match her unrealism as events career utterly beyond control.

What makes Fangirls unexpectedly memorable is more than the many plot surprises, impressive sets, and very fine acting and dancing (choreographed by Leonard Mickelo, assisted by Sharnon Millerchip) that director Paige Rattray has managed to pull together; it’s also, and most delightfully, the quality of its musical numbers. The songs sprinkled throughout the production, sung by three to ten cast members with surprising accuracy (and let down just a little by occasional problems in audio balance — chiefly some stupidly loud drumming), lifted the entire audience every time. By and large, and leaving aside the several numbers that the fictitious band performed, which were relatively forgettable, they’re well-crafted songs, a real tribute to the talent of the playwright and composer, Yve Blake; but what warrants special recognition is the sophistication and sweetness of the vocal harmonies that musical director Alice Chance created.

Whatever your age, this production will make your day. If you can, give yourself a treat and get a ticket.