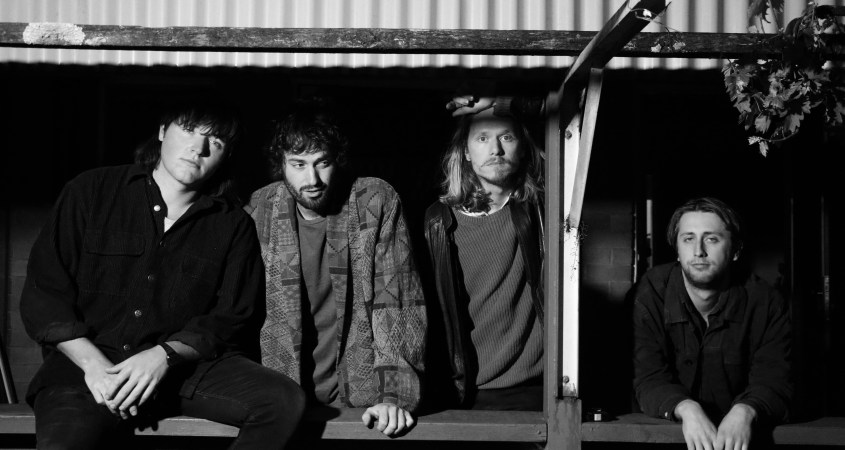 The third single in for Canberra’s Slow Dial sees the band fulfilling the promise of its previous work:singles Standing There (2019) and Koszi (2019).

Over two years, the band has not only attracted a decent fan base, landing them sold-out shows with fellow Canberra talent Teen Jesus and the Jean Teasers and Sputnik Sweetheart and the likes of Kingswood, but it’s also allowed for a productive fermentation of their style, sound, and songwriting.

You Don’t Talk Much was conceived during the lockdown, the band stowed away in the Blue Mountains no less. The idyllic workshop seems to have paid off: the new single contains enough verifiable, visceral fire to fortify their live reputation while sustaining a confident leap straight up to the next level.

Replete with drumstick count introduction, You Don’t Talk Much preserves the raw muscular sensibilities of the band’s early work while harnessing a newfound, refined musical aesthetic. Kicking off with an accented, boots and all-bass-heavy rock riff that cleverly maintains a kinetic indie parlance, the track swiftly ascends—partially by way of a dreamily assertive vocal from Damon Mudge—to satisfying melodic, galvanising heights.

As the band says of the new track: “With this song we wanted to capture the energy of that chaotic part of a night out when everything is in full swing.”

Yes, well, there’s certainly a frenzied kind of application of the band’s match fit wares here, the comforting sense that this feels like a legitimate presentation of a four-way creative collaboration. There is also an all-over melancholic swagger explicitly emanating from the supplicatory tone of the melodic choices.

One can easily imagine oneself standing amid a crowd of eager to be pleased gig attendees, thoroughly blitzed and blasted, not necessarily from any of the usual, nameless life-numbing constituents but from the more heartening, life-reaffirming elements that rise to the surface on You Don’t Talk Much, the power rock sizzle that is Slow Dial’s latest.