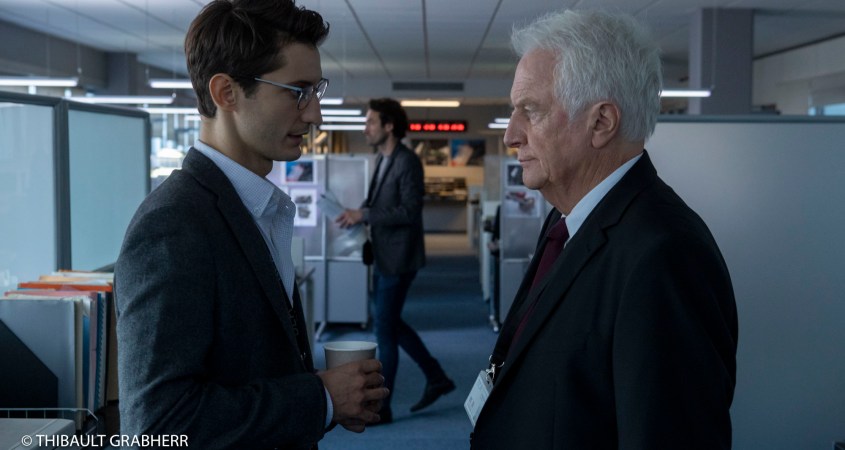 Mathieu (Pierre Niney), a dedicated, highly skilled air-accident investigator with exceptional ability to distinguish sounds on cockpit voice recorders, is assigned to help investigate the cause of a major air disaster on a brand-new aircraft. Anomalies and past incidents in the same model of craft, both too easily dismissed, lead him to question whether the cause of this crash is the straightforward act of solo terrorism that others believe it to be; but his exploration of the possibilities that suggest themselves meet official resistance, beginning with the lead investigator (Olivier Rabourdin, in a role he slips into naturally), and even his wife, Noemi (Lou de Laâge), begins to treat him as paranoid. Once Mathieu concludes that the flight recorder has been doctored, his boss (played by a likeable André Dussollier), taking into account a past over-interpretation by Mathieu, takes him off the case. Mathieu is unsure whom he can trust; if he is to uncover the truth, he must go it alone. Even his friend (played by Sébastien Pouderoux), hoping to lure Noemi to work for him, undermines him.

Niney does an incredible job of conveying the way his character thinks, and the acting by Dussollier, Rabourdin, and de Laâge succeeds in conveying his increasingly difficult relationships with those who oppose the direction in which his investigation is taking him.

Tight framing contributes to the drama — not always at the most dramatic moments — as do bursts of quick shots, accelerating the action without losing continuity, and in the end, though not fully spelt out, the story hangs together well, leaving you, if not entirely happy, at least satisfied that justice is on its way. A good mix of personal and sociopolitical drama, Black Box will also leave you thinking about how much more complex reality may be than appears in the nightly news.