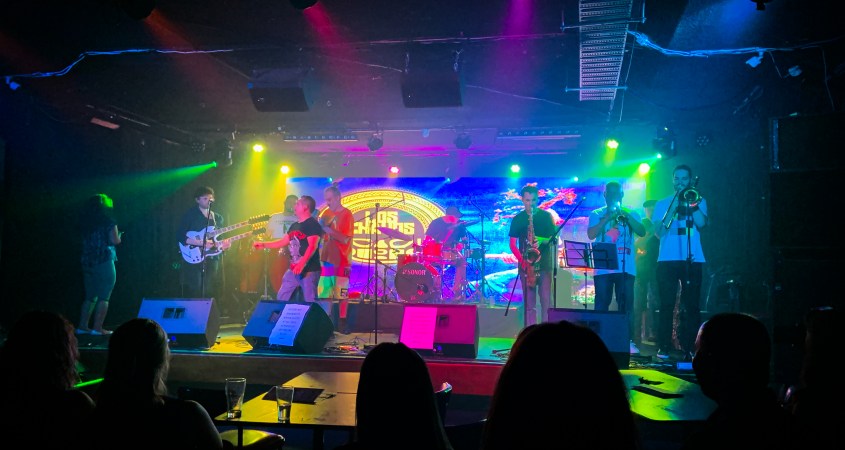 Instinctual excitement filled our ride to The Basement. It was like the Golden Years again, edging to be immersed by great music and elated souls. Like before ‘social’ was infected by ‘distance’.

I just hoped it wasn’t a seated gig – surely Canberra’s beyond that?

We skipped down the stairs into a sold-out roots and reggae concert. Seats. Everyone seated, groups distanced, and the eight-piece Shadow Ministers pumping sweet dub grooves from a nicely lit stage. Weird. Where’s the front row bending at the hips, getting down after 11 months of pixilated concerts?

Nonetheless, everyone was stoked to be there. Rafa (Rafael Florez) always puts on loving and uplifting shows, and this was a standout by adding guest musos to each band.

Shadow Ministers played with a captivating energy. Gun members of Agency Dub Collective, Dub Dub Goose and Los Chavos worked with guest vocalists MC Tomasky and Kyra Lloyd for a cracking opening to the night. Special shout out to Joel for rocking a keytar.

Between acts the bar manager performed his wry Covid comedy. The health office should be proud. Like an air host for a rock venue, he patiently explained the shit reality of current requirements: don’t stand and drink, but drink so the venue survives.

Permit me in this review, if I may, a brief moment for a pertinent rant.

I’ve always lamented the financial link of music to booze, but people hardly buy albums, and Spotify pays about 0.003 cents per stream (Apple music is about double, but double of nothing is useless). So the venue and bands must rely on tickets and drink sales, but the 800 capacity venue was Covid-full with 150 people. The viability is precarious with Jobkeeper, and if that finishes next month without capacity changes, the music industry is fucked. Did you notice that the Australian aviation sector was given over a billion dollars in the lockdowns but music, also operating below 5% of pre-Covid levels, got an old AusCo fund with a new name? MusicACT, APRA and others are desperately trying to find a solution.

Alas… But back to the awesome gig.

Mr Bar Manager announced the game-changing news: THERE IS A DANCE FLOOR! No longer at the front of the stage, the venue assigned a boogie area near the bar so we didn’t forget to drink with a few conditions.

The cool bass and deft guitaring of Kopasetic ignited the dance floor. They have a beautiful diversity of roots moods and their new song, Petrified, is a stunner. Dancers were doing the covid do-si-do: following the rock host’s interpretation of the health rules, people were gliding from the d-floor to a stool to sip a drink and jump back up to dance again. No-one was sure what it achieved, but the host was happy and so were we.

The Decideds, a new rootsy-dubby-funky-jazzy-gypsy eight-piece fronted by the wonderful and hilarious Rafe Morris, thickened the dance floor and swayed those in their seats. The bright happiness of each band member streamed through their music, enlivened by Kyra Lloyd’s outstanding vocals.

Then we were ready for the pièce de resistance, Canberra’s musical red cordial spiked with tequila: Los Chavos! Their intoxicating urban Latin reggae was strengthened with cameos by Rafe and Canberra’s musical godfather, Simon Milman. Horns, hands, and smiles were raised to the very last beat.

The Basement is a stellar venue, well set up with a priceless rock vibe, though the audio engineering didn’t always do justice to the night’s large bands. Another issue was that the line-up was nearly all male. Each muso deserved the gig, but so do more females.

The golden years are behind us for now. But gigs like this keep Canberra soulful, connected and alive.

One thought on “[Gig Review] A wealth of Canberra musical riches shine at Underground Roots and Reggae – The Basement, 5 Feb (with bonus state-of-the-industry rant!)”