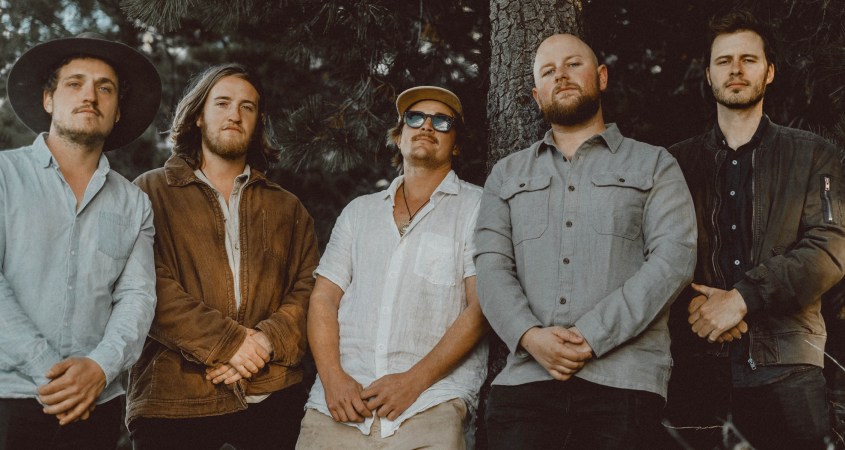 Plucky five-piece roots ‘n’ reggae tinged, off-beat folksters Kopasetic are playing at The Street Theatre on Friday, 10 September. They are celebrating the release of new single Petrified. As such, we here at BMA thought it high time to catch up with the crew to find out where did they come from, where d’they go (the ol’ Cotton Eye Joe treatment).

Let’s do it to it! Over to you Mr Alec Randles…

Our name comes from the slang word ‘Copacetic’, meaning something like ‘in fine form’, or ‘in good order’. Hah!

There is an interesting variety of ideas of where the word comes from. It’s been the name for my imaginary band since I heard it while backpacking across Jamaica in 2015. A member of the Rastafari in the Blue Mountains of Jamaica kept saying the word. He told me it came up during the colonial period where pirates, locals and colonials alike would use the word for when everything was cool and calm. I liked the story, and it stuck in my head as a band name.

I think it suits our music, and it is also a subtle call out to roots-reggae folk because of the history of the word in that music.

I (Alec) started performing when I was studying in the United States and I was absolutely blown away by the music scenes in that part of the world – like in Memphis, Nashville and Kansas City. Inspired, I wanted to continue with performing when I got back to Australia. However, it seemed a lot harder for me to get momentum here as a solo folk artist than it was over there.

I just wanted to play more shows, and I thought putting a band together was the way to do it. I reached out to two guys from high school that I remembered were excellent musicians – Henry (bass) and James (drums). We got together in early 2018 and started jamming.

Kopasetic started really slow, but we just kept practicing until we had a tight, distinct sound. It all started from there.

This is a hard one.

Kopasetic’s original music is ‘roots’, but is probably just off-beat folk music that draws influence from the heavy lead bass and drums of roots-reggae music. We lack a lead instrument, so almost everything has gone into making a dope rhythm engine.

For the upcoming show at The Street Theatre, Kopasetic is lucky to have Guy Lilleyman (Guyy & the Fox) jumping in on some lead mandolin, which we are very keen for. Someone once called us a hornless version of The Cat Empire. I’m not too sold on that, but I kinda get where they are coming from.

Who or What are your influences, musical and/or otherwise?

Man this is another hard one to pick.

Despite the music Kopasetic plays, Henry (bass) is an absolute metalhead and also delves into a bit of jazz.

I have a history of fingerstyle guitar and songwriting inspired from the late ’60s and ’70s (think Neil Young, Rodriguez, Townes Van Zandt, and Bob Dylan).

I was absolutely taken by reggae music since around 2014, and found myself drifting away from more classical styles of guitar and into roots music. Since jamming together, we’ve all started sharing a deep interest in roots and reggae music. This said, we also hold some key band influences as Roberto Fonseca, Ray Lamontagne, Bob Marley and the Wailers, Don Carlos, Fortunate Youth, Bonnie Raitt, and Victor Wooten.

Aside from music, we draw influence from progressive activism and any person who stands up against environmental injustice.

Sharing a stage with Australian roots legend Jeff Lang is a cool thing for us to look back on.

We also headlined the Roots and Reggae by the Lake festival at Lennox Gardens in 2019 with an audience upwards of 500 people. It was such a good vibe that afternoon, like something from a dream.

Another super memorable experience was when we sold out Smith’s Alternative for our debut EP launch back in 2019 with our close friends Bobby James supporting us. We sold over 120 tickets that night and around 70 EPs, which was such a surprise. It really encouraged us to keep pressing forward.

Some of our biggest feels go out to venues like Smith’s Alternative. Especially in the early days, we found Smith’s to have been one of the only venues that gave us artistic comfort as young people to play and create music the way we wanted to, and in tribute to the music and artists that we thought were important.

We think Smith’s does an incredible job of fostering artistic integrity in local musicians. Performing at Smith’s has always reminded me of those fascinating music scenes I was a part of in places like Nashville and Memphis. I can taste the nostalgia when I walk through those doors.

Aside from being regulars at Smith’s, we actually didn’t feel like we belonged to any particular music scene in Canberra until we met Raf Florez, who is the manager of Los Chavos and operator of Cultura Clandestino. He started booking Kopasetic for gigs on bills with bands like Los Chavos and Zambezi Sounds on Saturday nights.

It didn’t take long for us to realise that there was a roots music community in Canberra, and it was incredibly multicultural. It’s a damn fine music scene, and we are stoked to have been welcomed into it. I think our recent growth and selling-out of headline gigs in Canberra started with those shows and audiences, and we have made some great friends along the way.

Keep an eye out for the Cultura Clandestino gigs!

I actually think our recent recording of our new tune Petrified is something we will remember forever. We were having such a good time at Amberly Studios getting the scratch tracks down.

It is just such a vibe to be absolutely jamming to make a scratch track. To be able to look at each other from different rooms while you’re playing. Giving each other looks like “check out what we’re doing”. The connection you get with your bandmates at times like that is priceless. People would pay so much money to feel that feeling, but it can only come from hard work and connecting together through music.

No idea, let’s see what COVID19 has in store for us.

We were on a cool ride leading up to the outbreak of the pandemic, getting accepted into interstate music festivals and so on. But all that just ended so suddenly.

We would love to just keep pushing roots and folk music here in Canberra, and reminding people of how powerful the history, music, and messages can be in these genres. Not to mention how good it sounds live.

Our ultimate goal would be to play Woodford Folk Festival. Mmmhmm.

Don’t forget to come see us perform at The Street Theatre for our single launch for Petrified on Friday, 10 September 2021.

Also, we love to chat with anyone about the history of roots music. Feel free to reach out to us via instagram or facebook (@kopaseticband).

Support BMA Magazine on Patreon!
13% complete
When we reach $500 per month we will begin the official BMA Podcast. This will include interviews with some well-known musicians and artists, tips and tricks for publishing in print and online, as well as other discussion topics around Bands, Music and Arts in Canberra!