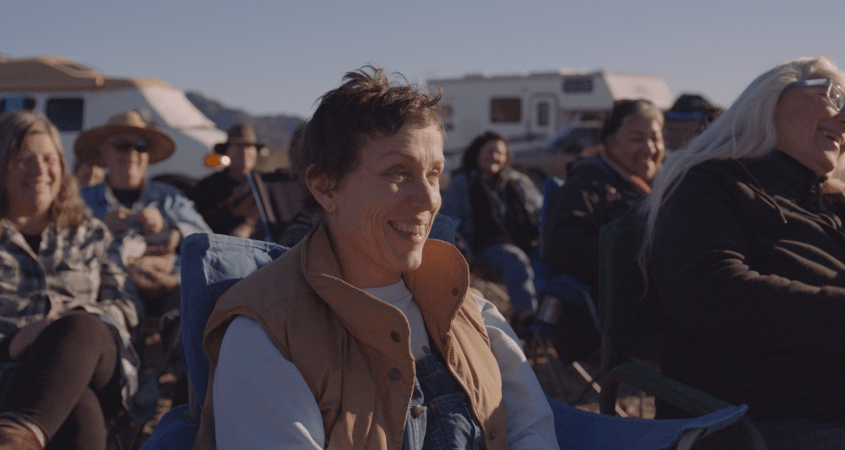 It’s winter in Empire, Nevada, and U.S. Gypsum’s plant there, which has provided work for most of the town, has closed down. Snow covers the ground, and temperatures remain well below freezing even during the day. Having no other work to go to, most of the town’s residents have left to try to make a life elsewhere. Fern (Frances McDormand), widowed and now unemployed, tries to hold out, but, with no prospect of employment, eventually takes her van onto the road and begins life as a nomad.

Although her journey is a solitary one, Fern meets many on her way who enrich her life, help her out, and become dear to her. She in fact discovers a community of nomads, some running away, some running toward, some simply embracing a day at a time.

Life on the road is often tough for Fern, the ability to keep her van and herself going depending on eking out each pay cheque as she moves from one menial job to the next. She spends many times in a laundromat alone, or eating by herself, or singing to herself to keep up her courage as she drives into the unknown. But she also finds expression for all that lies secretly within her — lost love, lost time, and perhaps even one or two dreams. And in her solitude she opens herself to the world: bending into cold winds along a wild coast thrashed by tumultuous waves; trudging through snowy fields; floating in a river.

Nomadland is filled with eccentric and hurt but largely hopeful characters roughened or rubbed smooth by life’s twists and turns. These are people with broken dreams and limited options. Evoking the utter truth of the life of a nomad takes some brilliance, and Frances McDormand, as Fern, is so compelling that it’s difficult to believe she isn’t a nomad herself.