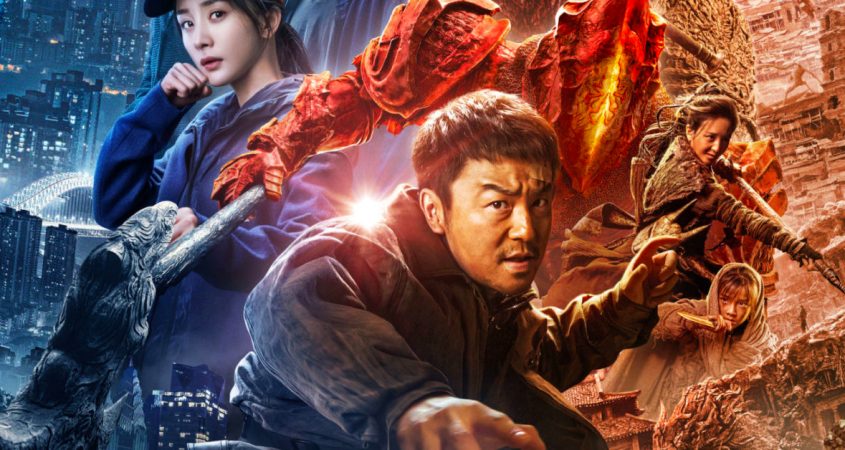 Guan Ning (Jiayin Lei) has increasingly entered another world whenever he closes his eyes, a world from which his daughter calls for his help as a monster captures her. Guan Ning has been searching for his daughter, Tangerine (Liya Tong), sacrificing his marriage and his career, for the six years since her abduction. He has a single advantage over her abductors: the ability to throw small objects at great speeds in controlled trajectories.

When a stranger, Tu Ling (Mi Yang), rescues him from imminent arrest and offers to reunite him with his daughter in exchange for use of his ability to assassinate a novelist, Guan accepts the exchange. The novelist, Kongwen Lu (Zijian Dong), is writing and publishing on line a novel, Godslayer. The novel’s hero, Kongwen (also Zijian Dong), seeks to slay the god-like tyrant Lord Redmane. But Tu Ling’s boss, Mu Li (Hewei Yu), is badly affected whenever Redmane is wounded, and seeks Lu Kongwen’s death in order to save himself.

Guan learns that his dreams of the other world foretell the novel’s development; and Mu Li, who somehow knows this, is convinced that Guan Ning is Kongwen Lu’s ideal assassin. Guan is canny enough to discover that Kongwen Lu is an innocent party and needs his help; but he hasn’t reckoned with encountering similarly gifted back-up assassins.

On the other hand, Lord Redmane, in the other world, has not reckoned with the assistance of Kongwen by the spirit Black Armour (voiced by Jing Fei Guo).

Far more than an action movie, A Writer’s Odyssey remarkably situates a tense action thriller in a parallel-world fantasy that presents to the viewer as a mystery.  Director Lu Yang (who co-wrote the screenplay from the novel by Shuang Xuetao) doesn’t neatly tie up all of the mystery’s loose ends: the film makes no attempt to explain the parallel world’s origin or connection with our own mandate world or even Guan Ning’s gift, and its denouement introduces a further surprise element that, sans explanation, seems like a feel-good gratuity.  But, on the whole, the plot threads together surprisingly well the mundane world (albeit with the odd character of very special abilities) and this other, novel- or dream-generated, world.