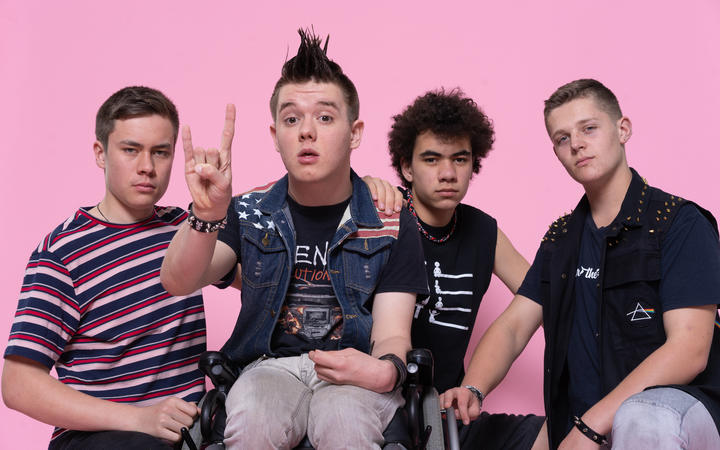 Hailing from Gisborne, New Zealand, punk rock band Sit Down In Front has released their new single Don’t Push the Button with wheelchair front man Cory Newman. And the much-anticipated new single does not disappoint. It’s a scorching slice of punk rock, and entertaining commentary on our challenging times, a riveting two and half minute encapsulation of the band’s spirited and open-eyed ethos.

After experiencing massive success with their breakout single Rain, Sit Down In Front have emerged ready to take on the much-maligned political powers (namely the US) that threaten world peace. The new single was a favourite with their fans across the country on the band’s recent Who Ate All the Pie’s New Zealand album tour.

Don’t Push the Button is a conclusive, blazing confirmation of these high school students’ artistic adventurousness, audacious presence, and sheer unadulterated punk prowess. Brimming with pure magnetic energy, the track is an unrelenting, irresistibly cathartic musical experience not to be missed.

As Cory Newman says about the inspiration behind the new track:

“It’s a song that mocks Donald Trump and highlights his juvenile antics in the oval office. I was travelling in America with my family when I saw Donald and Kim Jong Un squaring off about who has the bigger ‘button’ so I thought it would be a good basis for a song that had the added bonus of mocking what a poor leader Trump has been. It’s a plea for him to stop inflaming things with his ill-thought-out rhetoric around nuclear war and to get a conscience.”

Sit Down In Front has blended all the exciting punk pub-rock elements-the fiery vocals, the breakneck speed energy, and the less-is-more style-and wedded them to a timely and humour-tinged lyric. The result is a highly satisfying, rousing punk rock track sure to appease their growing fan base.