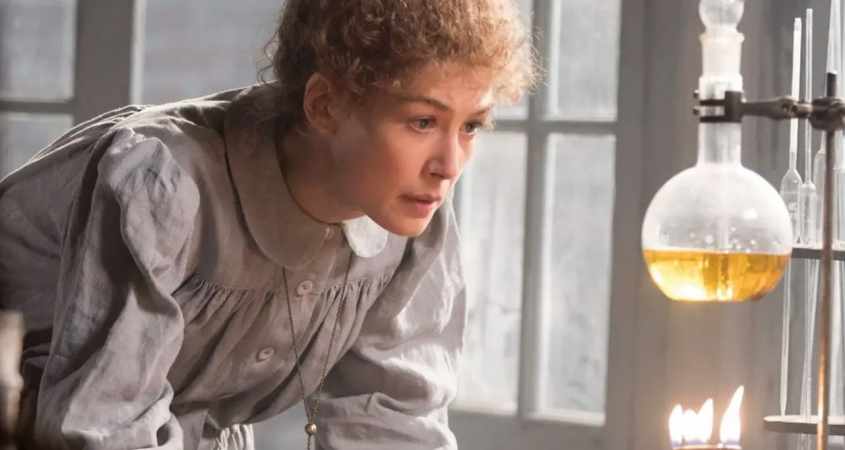 Occasionally the adventure of scientific discovery can rival science fiction for the possibilities it suggests. When Marie Curie and her husband Pierre isolated a substance that glows in the dark, radium, from pitchblende, the ore containing uranium, many bright sparks in marketing found appealing uses for it in everyday life. Members of a public as unwary as the Curies themselves, with no concept of its dangers, thought nothing of being in close proximity to it and even applying it directly to their skin.

Decades later, we have learnt to be cautious of x- and gamma radiation, because we know that no amount of such emissions has been shown to be safe. But moviegoers can experience anew the wonder that such discovery can invoke and the discoverer’s emotional journey too.

As Radioactive depicts it, Marie Slodowska (Rosamund Pike) has been stymied by her scientific supervisor: the quality of her work has taken second place to consideration of her sex and her presumed Jewishness, and she has lost a lab in which to work. Pierre (Sam Riley), seeing great potential in her, offers use of his lab and seeks to join her in tracking down what enabled pitchblende to fog photographic film. Their backgrounds are complementary, and with Pierre’s help Marie discovers two new radioactive elements, radium and polonium, identifies the electromagnetic (gamma) and particle (alpha and beta) forms of radioactivity, and correctly deduces the nuclear instability that gives rise to them. But the insidious effects of radioactivity on their health and on the health of unwary consumers of products that others have imbued with radium turn out to be devastating.

Albeit containing one or two minor confusions in plot, Radioactive does indeed draw us into a moving human side of the Curies’ rigorous scientific inventiveness as well as the mystery and adventure of discovery: foremost, the relationship between them, both before and after their marriage. Jumping forward in time to exemplify their discoveries’ practical results well after their deaths, the film takes care to illustrate both the obvious destructiveness (the H bomb) and the putative usefulness (cancer treatments) of x- and gamma radiation.

Of course, no longer need the buyer beware slow death by casual use of shoe-shop “fluoroscopes”, radium-painted watch dials, or other radioactive gimmicks, as these left the market decades ago. That destructive power now resides only in the hands of the military- and medical-industrial complexes. But its release through the Curies’ patient exploration and analysis atop Marie Curie’s insights is a story with rich contrary potentials. It may ignite a sense of wonder as to positive potential; or it may enjoin the most thorough investigation of the hazards inherent in new powers that inventors, designers, and entrepreneurs would gladly but blindly unleash on the unsuspecting on the basis that he who hesitates is lost.

In an age of accelerating discovery and invention, it’s heartening to see this film celebrate the lively curiosity that underpins both adventurousness and rigorousness.