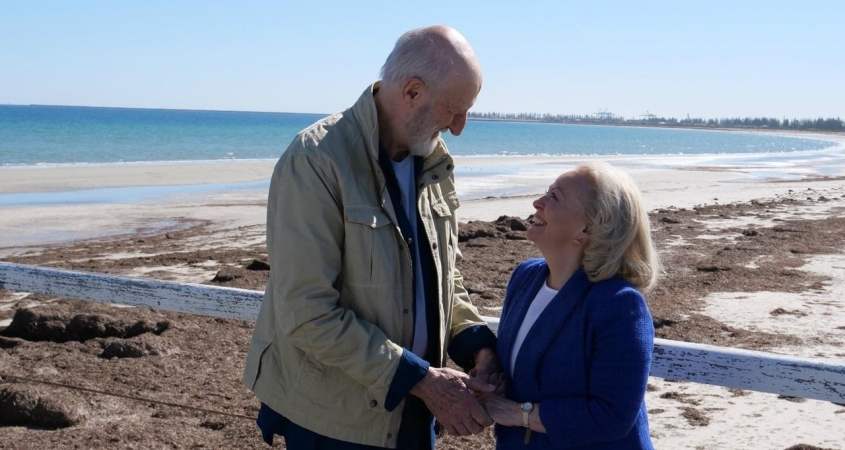 During the Vietnam War, four Australian soldiers escaped a Vietcong P.O.W. camp in 1965, thereby acquiring the name the Chainbreakers.  Fifty years later, their leader, Lieutenant Jack Bronson (James Cromwell), searches a war veterans’ aged-care home for the love of his life, Norma Jean (Jacki Weaver), who had served as a nurse in that war.  But the establishment sends Norma elsewhere to participate in a treatment trial and forcibly detains Jack.

Things look up only when Jack learns that the facility also houses the other Chainbreakers: Jeremiah (Dennis Waterman), Angus (Jack Thompson), and James (Roy Billing).  From here, it is a short step to reconstituting the Chainbreakers to undertake — with help from an old soldier and an enterprising teenager — one last mission.

But the Chainbreakers are up against the facility’s cold-hearted manager, Lin (Renee Lim), and the institutional forces she harnesses, imprisoning and disheartening the once heroic Chainbreakers more effectively than their old enemies had managed to; and all hope appears lost when the institution acts to neutralise Jack.

More frankly than most films set in aged-care homes do, Never Too Late hints at the callous disregard that too often passes for care decisions in aged-care facilities, locks and drugs serving staff convenience rather than its charges’ fulfilment, rights, or welfare.  And the film contains several poignant reminders of the regrets that attend life’s lost opportunities and poor decisions.  Despite such serious themes’ evidence to anybody watching it with eyes and ears open, the film never misses a comedic opportunity — and does so without laughing at the infirmities that too often accompany old age.

Fine comedic fare, and bearing out its title’s optimism, Never Too Late makes a heartwarming tale that will have both young and old at heart raising a glass and a laugh to the Chainbreakers’ planning, daring, and compassion in venturing to recapture command over their own lives.