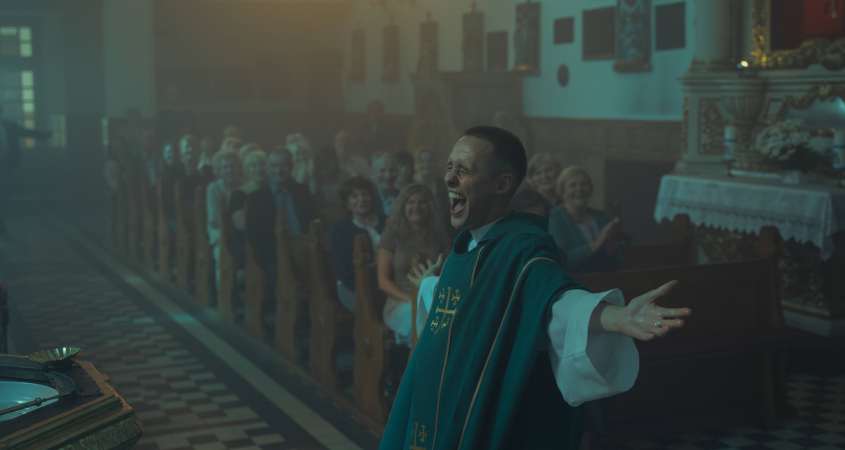 In juvenile detention, Daniel (Bartosz Bielenia) has been bitten by religion under the auspices of Father Tomasz (Lukasz Simlat), but nonetheless cannot, as a convicted criminal, join the seminary.

Upon parole, Daniel expects to find, as most other parolees do, that his only option is to work in a distant town’s timber mill. But he cannot do it. A prank locking him into taking on the role of a priest, Daniel instead becomes a counterfeit itinerant priest, at first assisting and then standing in for the town’s incumbent priest (seasoned actor Zdzislaw Wardejn). Along the way, having shed his past, Daniel adopts the pastoral role with an enthusiasm that infects the church congregation with a modicum of sincerity.

As Daniel comes to grips with a three-year-old tragedy that has affected the town and led to an impasse between those it has most affected, his priestly role calls on hidden reserves of compassion and imagination. But resolving the problems that the town’s incumbent priest has himself been insufficiently detached to resolve will mean overcoming entrenched resentment and ill will. Adding to this paralytic conflict’s intractability is the rigidity of the timber mill’s owner, the Mayor, whom Daniel recognises he will have to take on.

And then Daniel is recognised.

Alexandra Konieczna plays the priest’s cool-hearted assistant, Lidia, with an air of menacing strength that represents well the threat hovering always over Daniel and his efforts; Eliza Rycembel, by contrast, gives Lidia’s daughter, Eliza, a quietly protean character: evidently on the side of the angels but unpredictable. Bielenia’s Daniel himself, demonstrates a passion for his frustrated calling that, in a more forgiving milieu, might transform him utterly.

The film is not altogether what you might expect. What would have otherwise seemed a modestly tense drama has a couple of scenes of unusually graphic violence bookending it with the grimness of juvenile detention in Poland. With that caveat, the screenplay’s truth and the power with which its cast enacts it give Corpus Christi a place amongst today’s most important social commentaries.