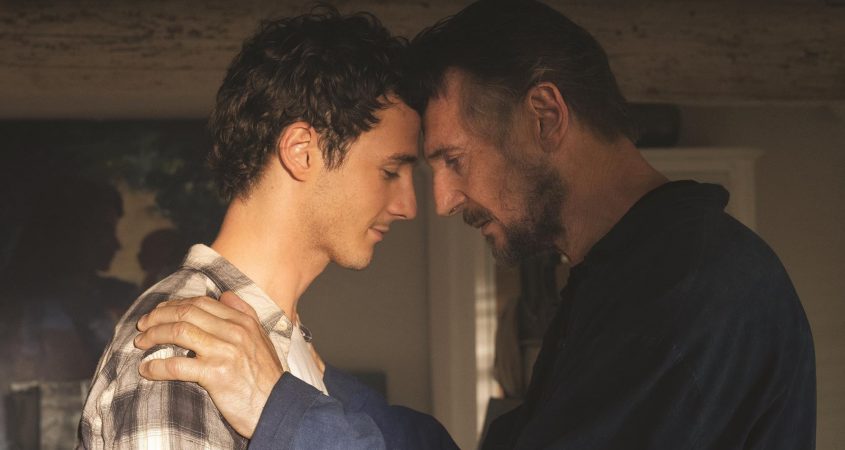 A famous painter, Robert (Liam Neeson), and his young son, Jack (Neeson’s real-life son, Micheál Richardson, who acted with Neeson in Cold Pursuit also), long ago left the Italian villa they jointly inherited when their respective wife and mother, Raffaella (Helena Antonio: Arrivederci Rosa), suddenly died. But, needing the money in order to buy the gallery that he has been running as a career, Jack talks his father into selling their once-stylish Italian villa, which they have let run down.

Jack and Robert, whose relationship has been distant for years, now face a mammoth task in making the villa habitable again, but with encouragement by their straight-talking estate agent, Ruth (Lindsay Duncan: About Time; Gifted) and inspiration courtesy of young local restaurateuse Natalia (Valeria Bilello: One Chance; Ignorance Is Bliss), they set about it — but reach a crisis when Jack discovers what his father has kept from him since his childhood.

Made in Italy holds up — despite having minor love-interest mismatching, few plot surprises, and a clunky romantic scene — chiefly because the emotions that Neeson and Richardson bring to bear on their on-screen interactions are undeniably powerful. Possibly the power of their interactions comes from their characters’ family history’s mirroring their own loss in real life. Either way, their on-screen reconciliation, marking a high point in the progress of a long-fraught relationship, is what chiefly makes the movie worth while, though the timelessly sumptuous views it offers of the Italian countryside only add to its appeal.

Screening at Dendy and Palace cinemas.