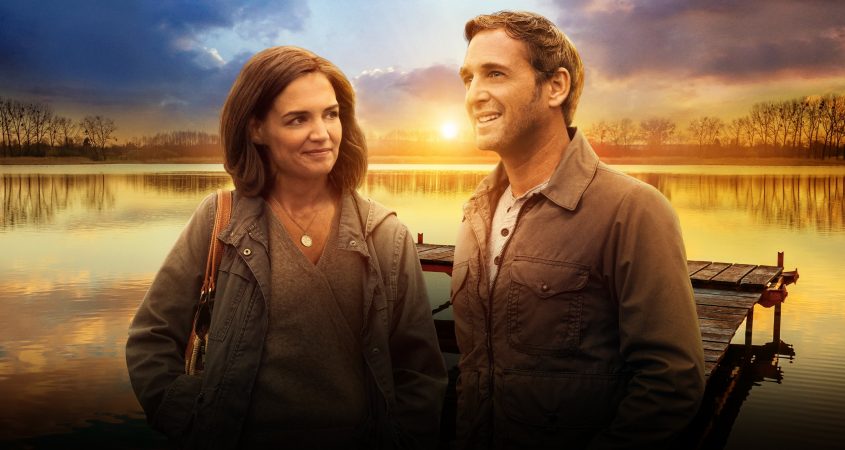 Miranda Wells (Katie Holmes — Batman Begins), widowed six years ago, runs her car into the back of a utility vehicle whose driver, Bray Johnson (Josh Lucas — Red Dog), happens to have a legal document to deliver to her.  Bray fixes her bumper bar and does some other kindnesses for the family, and along the way communicates something of his life philosophy — and somehow neglects to deliver the document.  Bray and Miranda and her children get along famously; but, meanwhile, Miranda’s boss — and of, late, boyfriend — Tucker (Jerry O’Connell), is staking his claim on her.

And what we find is that Miranda — along with her children, Missy (Sarah Hoffmeister) and Greg (Aidan Pierce Brennan) — is more herself with newcomer Bray than she is with boyfriend Tucker.

Though the movie is not exactly premised on (the book) The Secret’s “law of attraction” — the law being, in a nutshell, that you get what you focus on — Bray’s life philosophy echoes the ostensible law, giving it enough airplay to make us wonder whether the director has a message for us.

Though the dialogue is not outstandingly original, good performances by Jerry O’Connell and Aidan Pierce Brennan and heartfelt ones by Katie Holmes, Josh Lucas, and Sarah Hoffmeister carry otherwise familiar emotional tropes and a fairly straightforward plot to a warmly satisfying conclusion.  You may remember only specific faces and moments of the film in the months to follow, but The Secret: Dare to Dream will entertain and amuse you and give you a lift for the day.