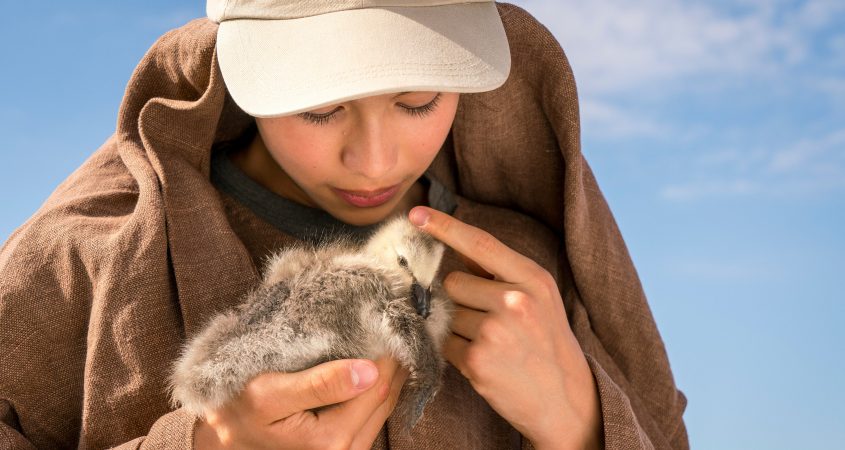 Fourteen-year old Thomas (Louis Vazquez) goes, by request of his mother, Paola (Mélanie Doutey), to spend the holidays with his ornithologist father, Christian (Jean-Paul Rouve), in the wetlands of the Camargue region in Southern France.

Christian, passionate about saving an endangered species of goose, wishes to trial something new: training a gaggle of newborn wild geese to alter its migratory path to largely avoid man-made hazards. Stymied by bureaucratic indifference to the potential value of the trial, Christian decides to take matters into his own hands.

Thomas, bored at his father’s home, where patchy Internet access obstructs access to his gaming addiction, begins gradually to notice the wild world around him. He also begins to get to know his capable and free-thinking father, and, when he happens to witness the hatching of the first gosling, finds himself drawn inexorably into the world of the newborns.

The plan to return the geese to the wild is well under way when bureaucracy steps in, putting the geese at risk of being killed, and Christian of being interned. And that is when Thomas, having learnt from his father the importance of direct action even unto civil disobedience, takes matters into his own hands.

This elegant and emotionally vibrant film is, surprisingly, based on true events. Directed by Nicolas Vanier (Belle & Sebastian), Spread Your Wings is shot exquisitely, the soaring aerial views bringing us next to the geese in flight and allowing us a glimpse of what these remarkable birds face on their long migrations and of the endurance they are capable of.

The geese’s journey mirrors those of Thomas and his parents. For better or worse, the geese will affect the lives of each as much as they affect the lives of the geese. An inspiring testament to the wonders of nature, Spread Your Wings will move and uplift you in equal measure.