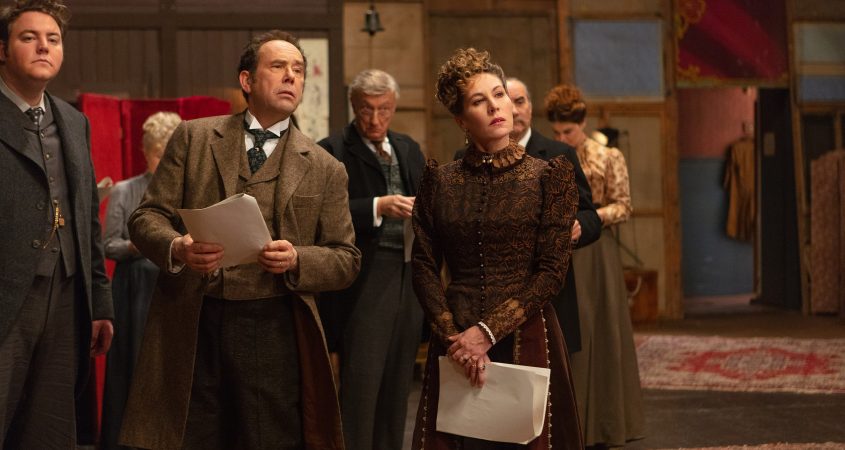 Edmond Rostand’s name may be unfamiliar until you learn that he authored a play, subsequently adapted for film many times, beloved the world over: Cyrano de Bergerac, the most recent English-language versions of which films starred Steve Martin, in 1987, and Gerard Depardieu, in 1990. That is, unless you also count Edmond. Edmond’s structure delightfully has Rostand write his play mirroring his life out of sheer desperation, so it almost counts too as a version of Cyrano.

In Edmond, Rostand, who has had only one playscript staged to date — a verse tragedy that flopped — is under tremendous pressure to produce a comedy, a genre entirely unsuited to his staid nature. As well, Edmond has no time available in which to produce the necessary work of genius, being obliged to support his friend Léo’s attempts to woo Jeanne, who has managed to capture Léo’s heart but recognises him for a clod and instead wants to meet the wonderful author of a certain recent verse tragedy, one Edmond Rostand, who has captured her soul.

As events overtake Edmond and inject farce into his life, he learns to adapt both his writing and his responses to novelty. But will he manage to put the lovers together, maintain his marriage, and stage his comedy despite the heavy hand of fatuous officialdom?

Edmond is a sweet romp from start to finish. Olivier Gourmet very likably plays impresario Constant Coquelin, insistent on starring in Edmond’s forthcoming play; Thomas Solvérès is perfect in the role of the harangued Edmond; and Lucie Boujenah delightfully creates Edmond’s muse, the costume designer, Jeanne d’Alcie. The film is sincere and artless, warm and natural, moving and continually funny. Enjoy it while it’s here; you’ll love it.