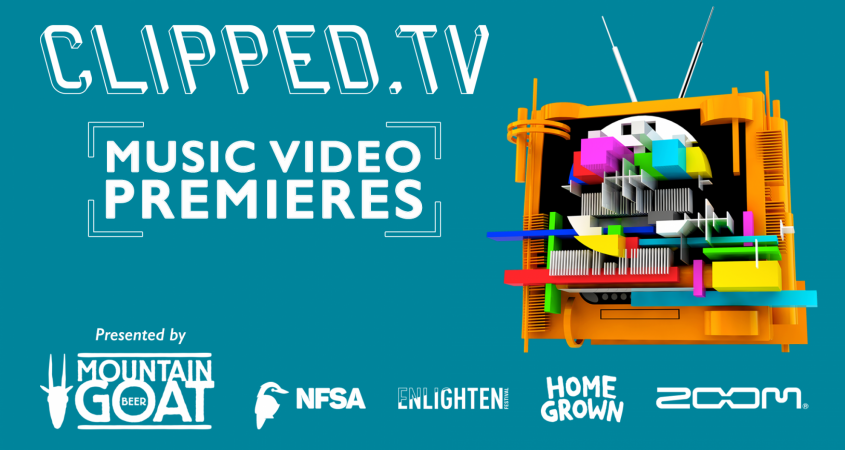 CLIPPED.TV curates a special night of exclusive Australian music video premieres on the big screen at the National Film and Sound Archive (NFSA) in Canberra on Friday 28 February 2020.

Presented by Mountain Goat Beer, CLIPPED.TV: Music Video Premieres is a night celebrating the art form of music video. As well as premiering new music videos by some of the hottest Aussie talent, the night will also feature an ‘In Conversation’ discussion on how the unreleased clips were created, Q+As with the filmmakers and artists themselves, as well as the premiere of restored 1980s classic music videos by legendary filmmaker Ray Argall.

CLIPPED Festival Director Samuel Bright said: “CLIPPED.TV is about about recognising and celebrating music videos as a true art-form. We’ve got an incredible line-up of premieres to showcase with many either created by or featuring a talented crop of Canberra artists.”

Canberran music videos premiering on the night include:

As well as taking part in a live Q&A, celebrated filmmaker Ray Argall joins the line-up to premiere three of his classic 1980s music videos: Read About It by Midnight Oil, Message To My Girl by Split Enz, and Good Times by Hoodoo Gurus. These classic clips have been restored from the original film negative components and remastered with digital quality sound and will give audiences the opportunity to experience them in a way no one has ever been able to before.

As well as a night of spectacular premieres, all ticket holders will receive a complimentary brew from Mountain Goat Beer on arrival, go into the running to win a pair of Audio-Technica headphones and an amazing Zoom F6 MultiTrack Field Recorder.

Rapper Citizen Kay said, “In my mind, Canberra is no doubt going to become one of the top creative hubs/cities in the world. I don’t know when, but it will. There’s way too much quality music, art, creativity, and growth happening right now for it not to be.”

General admission tickets are just $25 and can be purchased from http://www.nfsa.gov.au/events/clippedtv-music-video-premieres

But thanks to CLIPPED.TV and the NFSA, we have five double passes to bestow upon you, the music video loving populace. For your chance to win, tell allan@bmamag.com what your favourite Canberra-related music vid is.